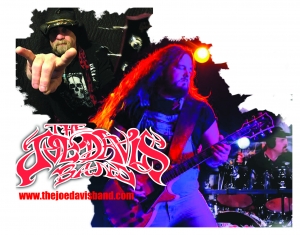 National magazines featuring Joe Davis and the JDB
After the release of four albums in 2010 simultaneously, the buzz that was generated attracted the attention of Guitar World Magazine and in the April 2010 issue they released a video in their magazine. To all their subscribers worldwide.

To top that, Joe Davis recently recorded a new album entitled The Skydog Woody Project..with the most collectable guitar in the world. Duane Allmans 1957 Gibson Les Paul, aka "the Layla guitar".

A write up in this issue of Guitar World July 2010.

A write up in this issue of Guitar World July 2010.
The Joe Davis Band is featured in the editors column, where people can write in and share their thoughts on the former issue. The former issue had a dvd, that showed the live video for JDB "you can't stop me" at the man made festival in 2009.
JDB has many music videos of their different songs. They are also currently filming a music tv show that will air on the web!

Guitar Legends...page 70
Joe Davis featured in Guitar Legends.
On the Skydog Woody Project album the song "Layla", was re-recorded with the actual guitar that made the original song.

Joe Davis, Duane Allmans guitar story reveled!
Joe Davis and the Duane Allman guitar story revealed!
Guitar World, January 2011, page 30. Front cover (bottom right). The story behind the return of Duane Allman's guitar. How Joe Davis swam with alligators to get to see the gold. Then bringing the guitar to the Allman Brothers Museum where it now can be seen by all.

The Joe Davis Band, our homesite...
Please visit www.thejoedavisband.com to check out all the videos, tour dates, fan pictures and all the music featured on our site.
We have full listings of songs, tour dates and appearences.