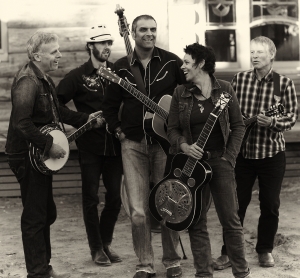 "Every now and then, if you’re patient, you discover a real treasure trove of wonderful music. That’s exactly what happened to me when I first played The Stetson Family ‘O Winding River’ album. Superb harmonies, outstanding musicians and top quality production makes this album a must for all lovers of contemporary bluegrass and country music. Thank you to the Stetson Family for giving me something exceptional to play on my programmes on BBC Radio in England." Joe Fish - BBC Radio UK

The Stetson Family are a part of the new generation that respectfully tip their hats to Americana, contemporary bluegrass and folk whilst free-wheeling with their own unique sound. They’re said to be “more Old Crow and Gillian than Del, Jimmy or Bill.”

Their original songs are story-driven and infused with lush harmonies that take the audience on a journey down life’s often joyous and sometimes crooked highway. Their harmony workshops are inspiring and fun, often seeing the participants invited on stage with the band at festivals.

Long-time friends, Nad Budge (frontwoman/guitar/dobro), John Bartholomeusz (guitar/vox) & Colin Swan (Banjo) were all in a synth-pop band together in the mid 80’s, supporting the likes of the Eurythmics, The Monkeys & John Farnham, before teaming up in 2008 with John’s childhood buddy, Andy Carswell (mando) from My Friend the Chocolate Cake. Luke Richardson was the double bass-playing bloke who worked in the hardware store across the road from Nad. They swapped synths (and mullets) for proper instruments and out popped the Stetson Family. Their two albums, 'Hey Sister Mary, Where’d You Get That Gun' and 'The Devil in His
Sunday Best' have garnered great reviews, with Devil described by Rhythms Magazine as “A landmark Australian roots album.” Their U.S. compilation album 'O Winding River' has also been widely praised.

The band’s third Australian album is well underway and will be released in early 2015. The title track of 'O Winding River' was included on the Australian Broadcasting Corporation's 'Saturday Night Country Favourites' of 2012. They’ve been nominated and finalists in two categories at the Victorian & National Country Music Awards for Best Group and Best Bluegrass Song and two of their songs were included in the SBS TV documentary, Last Chance Saloon.

The Stetson Family’s sound is what happens when veteran musicians and vocalists are confident of their strengths and are dedicated to the music as a whole instead of the individual contribution” Prescription Bluegrass, Kingman, Arizona
18
What's This
Advertisement