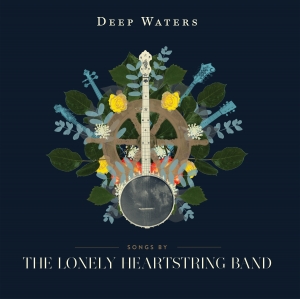 
“These guys are as close to the real deal as it is possible to get. They made my hair stand on end.” - Darol Anger, fiddler in Republic of Strings, Associate Professor Berklee College of Music

“These Heartstring boys have carved out a fresh niche in modern bluegrass. They adhere to the traditional format but take everything two steps forward. Their roots are clear and so is their path to the future. They’re in a class by themselves.” -Tony Trischka, banjo player extraordinaire and Director, ArtistWorks Academy of Bluegrass

Though Deep Waters is the Lonely Heartstring Band’s debut album, it nonetheless feels deep, with a maturity and wisdom far beyond what one might expect from a first release by a relatively young band. Having come together officially only four years ago, the Lonely Heartstring Band has already been hailed by luminary Tony Trischka as having “carved out a fresh niche in modern bluegrass,” and similar accolades not often accorded to a debut outing.

The Lonely Heartstring Band, named in a tongue-in-cheek, tip-of-the-hat reference to one of their favorite albums, Sgt. Pepper’s Lonely Hearts Club Band, is a genuine musicians’ band, immediately appreciated by fellow musicians who get their sound.

That said, this is not esoteric or effete music intended for a select few, but has listenability that appeals to the band’s already-devoted following of fans and to music critics alike. Though their music is akin to the Punch Brothers, Alison Krauss, The Infamous String Dusters, and other folk-grass/chamber-grass groups in the Americana world, this band is already well on its way to making a dynamic and distinctive sound all its own.

Though characterized by intricate, precise, even elegant arrangements, the Lonely Heartstring Band’s music still has all the joy and spontaneity of bluegrass or folkgrass at its finest, as exemplified in George Clements’s unique and sensitive, yet powerful, lead vocals, and their own extensive repertoire of originals.

The Lonely Heartstring Band is comprised of the aforementioned George Clements on guitar and lead vocals, his identical twin brother Charles on bass and harmony vocals, Gabe Hirshfeld on banjo, Matt Witler on mandolin, and Patrick M’Gonigle on fiddle and harmony vocals. Four of the five band members met while students at Boston’s Berklee College of Music. Gabe Hirshfeld, George, and Charles are all from New England, while Matt and Patrick are both from the west coast; California and Vancouver respectively.
“It was a very impromptu beginning,” M’Gonigle says. “We started as a pick-up band for a single gig, but our energy in those early rehearsals and our collective work ethic, not to mention the fun we had performing together, encouraged us to try booking second gig… and then a third, and so on. It was a very natural progression.”

The backgrounds of the individual band members, all outstanding on their respective instruments, and the approach that they employ in making each song their own, make it no surprise that they are already producing such accomplished and fully-realized music as found on Deep Waters. Speaking on the band’s dynamic, lead-singer George Clements notes that it’s interesting how varied and different each of them are in their approach to creating a song. “I think we all find inspiration in our own individual way,” and continues, “Each of us tends to gravitate to different musical aesthetics, but in rehearsals and during the arranging process, we can all agree on what serves the song best.”

Classically-trained Charles is often a total perfectionist, while George has a folkier and softer approach, both Gabe and Matt are more influenced by bluegrass, while Patrick is more drawn to improvisation and jam band expressiveness. “It’s great to have so many musical perspectives interacting in our band,” notes Witler, “These guys challenge me to listen with open ears and an open mind. I’m always learning something new in the process.” Somehow, it all fits together, and not only makes musical sense, but seamlessly blends into something all their own.

Hirshfeld further explains, “ I that think each of us holds a deep appreciation for the roots of our respective musical backgrounds, from traditional bluegrass and American folk music, classic country and even western classical traditions. That said, I think we’re committed to drawing on our musical roots to create something new, something that’s moving forward”. The band’s approach to arranging a new song, typically starting with just words, chords, and melody, always transforms the initial concept into something very different. On it’s own, the process of working together is sometimes enough to mold a song from it’s basic form into a completed original sounding composition.

Perhaps from their years at Berklee, perhaps from common musical influences and tastes, and certainly from having played music together and having travelled together, the Lonely Heartstring boys, with their shared musical vocabulary, are forging a style that is simultaneously both stimulating and listenable, new and fresh. Despite their varied influences, from classical to folk to traditional bluegrass, and because of them, too, the Lonely Heartstring Band never sounds like a clash of competing musical elements , but rather has a rich and fully-formed sound that respects and incorporates the full range of what each individual musician brings to the group. Like all fine bands, each player stands out, but the band’s music is clearly more than just the sum of its individual parts.

The songs on Deep Waters are all road-tested fan favorites from folk festivals, clubs, and concert halls, but will include a couple of surprise tunes as well. Fortunately, there are many more miles to travel for the Lonely Heartstring Band. They have given us a masterful debut that is a harbinger of much more great music to come.
43
What's This
Advertisement