Tony Rook - The Road Back Home 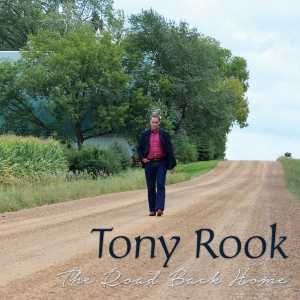 Tony was 12 years old when he first picked up a guitar. But it was well before that that the North Carolina native decided he wanted to perform.

Like millions of others, he was mesmerized by The Beatles’ “Ed Sullivan Show” debut, realizing then and there that music was going to be part of his life.

His parents were early musical influences. Dad, Carl, played guitar, and mother, Jean, played the piano during their church’s Sunday School services. But it was his uncle, Bill Meacham, who really turned him on to bluegrass. A Baptist preacher and mandolin picker who played professionally in the eastern North Carolina communities he served, Meacham willingly shared his tapes of his performances and mentored the budding musician.

The lyrical mandolin sounds and bluegrass beats lured the then teen, who by then was gaining an interest in rock ‘n’ roll. And while Tony joined several rock bands, he never lost that early appreciation for that “high, lonesome sound.”

By his early 20s, Tony was performing professionally as part of the folk duo, Riggs & Rook. When the partnership dissolved, Tony’s longtime love of bluegrass music drove him toward the banjo. By the early 80s, he was studying the five string with Bobby Hicks, Ricky Skaggs’ longtime fiddle player.

Before long, the singer/songwriter was playing with several bands in the North Carolina area, most notably The Eno Ramblers, and then Rook and Wood, who in 2000 released the CD, “Labor of Love,” containing 14 original tunes.

Songwriting remains a focus for Tony, whose contemporary bluegrass compositions are largely based on personal experiences.

While Tony’s musical influences include Tony Rice, Bryan Sutton, Earl Scruggs, Tony Trischka and Bela Fleck, he attributes his unique style to a lifetime of musical exploration and interest in a variety of musical genres.

In 2006, Tony was transferred to Minnesota, but quickly jumped into its bluegrass scene. He currently plays guitar, and sings lead and tenor with Dick Kimmel & Co.