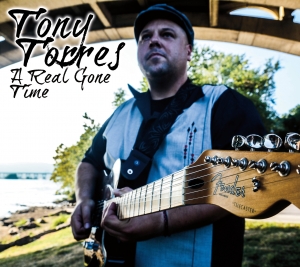 Blues Suede News Reviews Tony Torres New CD
Blue Suede News #108 pg. 37 by Marc Bristol
Tony Torres / A Real Gone Time
Tony fronts a powerhouse Blues trio, featuring the sort of wide variety of styles that I started this magazine 30 years ago to try and encourage. While his music doesn’t sound like the Paladins or the Tailgators, it reminds me of the sort of excitement I felt when I first heard those bands – both longtime favorites!
Tony’s been playing for several years in a big 8 piece R&B review with his co-writer here Dave Costaralla, and it’s time for him to step out and shine on his own. He’s backed by two different lineups, one called Real Gone and the other Tres Gatos. Kicking off in a funky groove with the title tune, it’s party time out of the box. The instro “Whammer Jammer” (from the J. Geils Band) at #2 would have made Freddie King proud. Torres’ vocals are a little gruff, but that’s par for Blues. “Let’s Rock It” has a Rockabilly feel. “Surf Queen” actually has a Bolero or Tango feel, and vocals. This CD is Roots Rock oriented, with a very nice variety of different styles and grooves.
“Out Of Your Head” is a Blues that shifts tempos between that “Smokin’ TNT Drinkin’ Dynamite” groove and a swinging shuffle like the Paladins used to favor a lot. “Katrina y Arturo” is another fine guitar instrumental piece, with a vaguely Latin feel. With 16 songs you’re really getting value for your dollar! The two other covers include Dave Alvin’s “Marie Marie,’ with some lyrics in Spanish, and Stevie Wonder’s “Ribbon In The Sky” - a mellow instrumental. Tony wrote half the songs on his own, and 4 with Costarella, who also wrote “Let’s Rock It” on his own. “5 O’Clock Blues” and “Cold Inside” are a pair of slower Blues, followed by the Instro of “Cowboy Surfer.” That one’s a favorite for me, with a bit of the Spaghetti Western feel to it! “Satisfied” has a Memphis Soul kind of vibe. “Tongue Tied” is kinda Jazzy, with a funky groove, fast picking.
This is a really nice collection of varied tunes, different grooves, all with Blues and Roots Rock at the center, by an excellent guitarist with very solid backing. “Baby Come Home” has some fine slide guitar playing, and the show closes on “El Gato,” another guitar instrumental workout with that Bolero feel, and a piece of “Miserlou” for good measure. Fine stuff! -MB