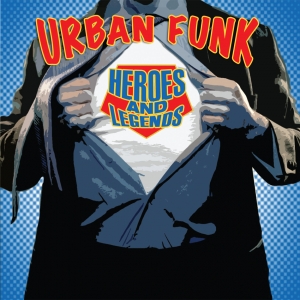 Urban Funk’s debut CD is why I am so determined to get my words heard, so I can spread the word out
about our music. “Heroes and Legends” is easily one of the best pieces of music I have ever heard.
There is nothing really bad about this release. The best of the best are in this group. These creative
energies have created the masterful release. Heroes and Legends were born by the love of the
saxophone. Probably, that is one of the reasons (our) Music keeps me dreaming of getting my energy and
spirit back, and Music Monthly (albeit) with a new name. Heroes and Legends is brilliant. Title tells it all,
and when you hear the best we have lay down tracks and create magic. On the disc are Steve Long,
Wayne Sulc, Jeff Bonk, Don Junker; John Thomakos, Tim Cututrona, Chuck Underwood¸ Tommy Lepson ,
and Jennifer Smith. If you get off on great, funky music, with amazing vocals, licks to die for, and freaking
awesome drums, excuse me, I mean percussion. I am sure the release is available wherever you can get
good and bad music. Thank you so much for the gift of this CD. The first cut knocks me out, and it just
keeps getting better from there. The fact that this record is all covers, doesn’t alter my opinion of this
record—these guys picked some great tunes. I imagine it was really fun laying down tracks for it.
Phenomenal listen!

Coconut Times Reviews Heroes And Legends
Thursday,
Wednesday, February 24, 2010
Coconut Times Reviews Urban Funk's Heroes And Legends
Now what got me thinking of those sexy men on sax was a blast from the past from our old friend Wayne Sulc who played with Jr. Cline and the Recliners for many years in several clubs here. Most of you know that Darryl (aka Jr.) had some health problems that prevented him from performing but he’s back and better than ever. Wayne told me they have played a few dates and are working on a return to Fager’s Island - maybe. Let’s hope, right? Anyway, Wayne has continued playing with several groups over the past few years doing everything from jazz to salsa, and now has assembled a group of superb musicians to produce a CD of Urban Funk titled Heroes and Legends. I can tell you I am really enjoying this collection of songs, most of which are arranged by Wayne Sulc with vocals recorded by another person with whom we are quite familiar, Tommy Lepson. The CD opens with the jazzy cool instrumental “Urban Phunk,” one of the originals on the CD, composed and arranged by Steve Long, that immediately captured my attention. Next is “Josie,” by Walter Becker & Donald Fagen, a superb arrangement by Mr. Sulc that is mostly instrumental with vocal tags by Lepson and Jennifer Smith. Following is “Mercy Mercy Me,” composed by Marvin Gaye, that is another combination of arranging genius and musicians’ triumphant performances. Another highlight for me is “Lourdes From Heaven” written by Wayne Sulc. So, you get the picture. Homage is paid to artists who helped shape the preferences and styles of these musicians; hence the name Heroes and Legends. This is a magnificent studio collaboration that spanned a few years to its completion. I doubt that we will ever hear these musicians assembled live, so go to saxman productions or request it from your local music store to hear what I’ve been happily listening to.

Ronald Jackson's Smooth Jazz Gateway
Urban Funk – Heroes and Legends
Bringing us some East Coast jammin’ is this MD-based group, Urban Funk, which does a really decent job of incorporating a solid group of covers with some competent original material to create Heroes and Legends, a nice collection to add to your smooth jazz goodies.Designed with the intent, as the group says, “to pay homage and elaborate on the creativity of our teachers, gurus and masters of an art form we love” as well as to “add original material as the culmination of the experiences performing, recording and representing the pulse of the eras in we which we participated,” this album obviously has a direction. The covers are nicely interpreted though only conservatively tweaked. I suppose that was to drive home the point that the approach to these tunes was to preserve the integrity of the compositions and to show respect for the work of those coming before this group. A noble gesture.
The original material suggests that the group didn’t just sit down and bang out a few notes, record them, and thrust them forward without regard to the listening public’s sensitivities.
After a funky and snappy opening track, their original “Urban Phunk,” the group goes right after Steely Dan’s “Josie,” a brave gesture in my opinion, since I highly respect Steely Dan’s work, and it handles it most effectively.
There are other examples of some satisfying quality playing (and singing, as is evidenced on Bobby Caldwell’s “What You Won’t Do For Love,” sung here quite well by one Tommy Lepson), and you can hear that time was truly used wisely-- and not wasted-- in creating this production.
Posted by Ronald Jackson at 8:28 PM

Urban Funk are a US band whose music isn't quite the funk that their name implies. Rather, the sound of Urban Funk is the sound of smooth jazz. On this 13 tracker you could make comparisons with outfits like Spyro Gyra and the Rippingtons, though in fairness these Urban Funksters offer, in places anyway, a little more bite and attack. Throughout it's all pleasing, pleasant and polished and like most classic smooth jazz sets the repertoire is a mix of originals and covers with a smattering of vocals thrown in for variety.

Indeed two vocal covers are the album's highlights – probably because of their familiarity and accessibility; they are Marvin Gaye's 'Mercy, Mercy Me' and Bobby Caldwell's 'What You Won't Do For Love' – two great songs to begin with and Urban Funk don't stray too far from the originals. In vocalist Tommy Lepson, though, they've found a real talent... no histrionics – just honest soul singing. The other covers are takes on Bob Marley's 'Is This Love', Christopher Cross's 'Sailing' (both very light), Steely Dan's 'Josie' (some great, driving sax from Wayne Sulic), Chick Corea's 'Spain', Santana's 'Samba Pa Ti', the film theme 'Black Orpheus' (all chosen to show the band can "do" Latin properly) and Stevie Wonder's 'Ribbon In The Sky' ( great keys from Steve Long here).


That leaves a quartet of original tunes of which the opener, 'Urban Phunk' is the strongest. It rides a great soul groove and features catchy rifffing from the three piece brass section. 'Under The Sea' is another goodie – more flavours of Steely Dan... clearly the band dig Becker and Fagen. More established smooth jazz outfits would be rightly proud of these two cuts and you can find out more about the album on www.saxmanpro.com , while the album is currently available from CDBaby.

Selections were chosen for their significant influence on modern jazz and our musical development. The better part of the last five years was devoted to see this project through.

Heroes And Legends was recorded at Studio 8121 with the support of engineer Mike Watert.