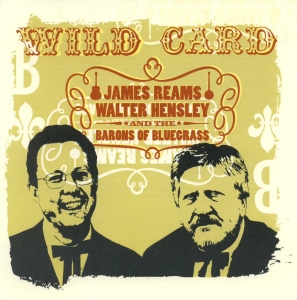 Coming from a family of traditional singers in southeastern Kentucky, James Reams has played both old-time and bluegrass music since he was just a little sprout. There were traditional singers on both sides of his family, and his father played in a string band. James migrated north in his mid-teens when his family moved to Appleton, Wisconsin, where he stayed until he moved to Brooklyn, New York in the early 1980s. In 1982 James arrived at New York's Port Authority Bus Terminal, carrying two cardboard boxes and two pairs of work shoes...looking for a better life, having left behind a dead-end job in an agricultural supply store in Wisconsin. At first, in his scramble to survive, he didn't play much music. But when he did, those who heard his authentic Kentucky mountain sound encouraged him to play more.

Before long, he started producing albums beginning with his first release "Kentucky Songbird" in 1994, followed by "The Blackest Crow" and "The Mysterious Redbirds" in 2000. He formed the Barnstormers in 1993 and released the first James Reams & The Barnstormers CD "Barnstormin'" in 2001. Teaming up with reknowned banjo player, Walter Hensley, resulted in the release of "James Reams, Walter Hensley & the Barons of Bluegrass" in 2002, an album that received an IBMA nomination for Recording Event of the Year and earned James an IBMA nomination as Emerging Artist of the Year.

In 2005, James Reams & The Barnstormers cut loose with the CD "Troubled Times" which included a feature length documentary of the band entitled "Rollin On" and a preview of the DVD documentary "Pioneers of Bluegrass" that was released in 2013. Combining talents with Walter Hensley again in 2006 produced the album "Wild Card", that had reviewers singing James' praise.
• "This new recording features songs old and new, borrowed and definitely bluegrass. James Reams has a deep baritone voice that wraps itself around the emotion of a song and won’t let go." ~ B. Hough of CBA
• “… another fine collaboration from James Reams and Walter Hensley. The result is an album full of spirited, traditional bluegrass music. James Reams’ solid rhythm guitar and strong vocals lend a solid foundation to Hensley’s clean and tasteful banjo picking..." ~ R. Steelman of Bluegrass Music Profiles.

Wrapping up an impressive compilation of music is the 2011 release of "One Foot in the Honky Tonk" which made two Top 10 CDs of 2011 lists and included a single that charted nationally. Check out the music videos from this album provided on YouTube.

A new CD, Rhyme & Season, is in production with an anticipated release date of November, 2015. This new album celebrates the perpetual pilgrim that lives within all of us with the goal of raising awareness about those who live on the razor-sharp edge of homelessness. According to James, "My intention is to embrace a wide range of human emotion from happiness and love to loss and sorrow, and over it all to express the hope I feel about the future. As I listened to some old gems, I was once again amazed at the depth that bluegrass music brings to understanding the human character. These songs inspired me to add my own contribution to the album in the form of original material that touches on similar issues affecting our world today." The release date is targeted for just prior to Thanksgiving to coincide with the National Hunger & Homeless Awareness Week. Songs included on Rhyme & Season pay special homage to the resilience of the human spirit and hopefully will encourage all who hear it to reach out to those in need, whoever they might be.

James celebrated 20 years as a bandleader in 2013 with a Coast-to-Coast tour and the long-awaited release of the DVD documentary "Making History with Pioneers of Bluegrass: Tales of the Early Days in Their Own Words.”

Known as an “Ambassador of Bluegrass,” James is dedicated to and deeply involved in the thriving bluegrass and old-time music community. He serves as President of the Arizona Bluegrass Association, is a co-founder of a production company that brings top bluegrass bands to the Phoenix area, coordinates an annual bluegrass-related film festival in Scottsdale, and is the promoter of a bluegrass festival in Brooklyn (Park Slope Jamboree) that has been going on for over 15 years.

His band treads the terrain where bluegrass, Americana, old-time, honky tonk and rockabilly meet in the night to swap stories. They provide a contemporary take on traditional bluegrass; blending it with innovation and vitality to create their own branch on the “roots” tree. His original songs (alone and co-written with Tina Aridas) are important additions to the bluegrass repertoire, keeping this tradition alive with contemporary issues and new sounds. His guitar playing was highlighted in Flatpicking Guitar Magazine's Masters of Rhythm Guitar column.

Take a listen to the musician that Bluegrass Unlimited praised: “There are few vocalists as natural as Reams. He doesn't have to try to sound down-home, he's there at each turn in the song.”

And that Banjo Newsletter hailed: "[James Reams sounds] as smoky as his heroes: Lester, Carter, and Red."
8
What's This
Advertisement