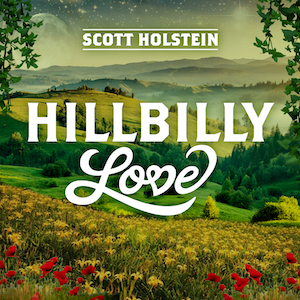 SCOTT HOLSTEIN DELIVERS THE FEEL-GOOD ANTHEM FOR THE SUMMER OF 2020
"HILLBILLY LOVE"
Scott Holstein's uplifting, feel-good toe-tapper is an honest celebration of the true power of community, faith, family & friends.

Holstein's "Hillbilly Love" takes you on a whirlwind ride through a current snapshot of a life lived wherein the simpler things really do matter most; even more so in these trying times. It's the magic, mystery and beauty of a new found cultural evolution... written in the mountains and in the stars...


"'Hillbilly Love' was inspired by the love of my life, my wife Lynda, who is from up on the plateau in Jamestown, Tennessee. Lynda went to the University of Tennessee and was in the marching band. Lynda’s father Frank Alexander was on the 1951 University of Tennessee National Championship Football team. Both are proud ‘hillbillies’. ‘Rocky Top’, a hillbilly classic, is the official state song for Tennessee and is also the ‘fight song’ for the University of Tennessee. We all love this classic hillbilly song. I grew tired of hearing the term ‘hillbilly’ used as a pejorative, so I decided to flip the script. I would instead use the word affectionately to say, ‘I love my little hillbilly’. From those inspirations I wrote the title, lyrics and melody for my song ‘Hillbilly Love’. I co-wrote and produced the song with my friend Scott Holstein." ~ Robert Weingartz

“The Troubadours have created something truly special and magical with their new live, acoustic version of ‘Hillbilly Love’.  They took a great song and made it their own.  Their signature vocals and enchanted harmonies are in full display on this acoustic gem.”  ~ Lynda Weingartz, CEO - Hillbilly Love

“In our 25 years of traveling this world, we always look forward to returning to our little cabin tucked away in the hills. As soon as the tires hit the gravel road, we start to unload and unwind as we look forward to our little piece of paradise at the end of the path. It is a sense so sublime, and we could barely communicate how it feels until we heard ‘Hillbilly Love’," says Aim Me & Renee, Troubadours of Divine Bliss. "'It’s a magnificent feeling’ …it’s ‘a unique way of living’…it’s ‘the most awesome-ist ever’ …it’s called ‘Hillbilly Love’!"

Aim Me & Renee continue to say, “Since that magical evening, we have been singing along with this ‘cultural evolution written in the mountains and the stars’. We are two people who try to ‘lead by living’ and ‘be true to who (we) you are’.

﻿One evening we got so inspired that we decided to cover this incredible, supercharged anthem with which we feel so much kinship. We turned on the camera and captured a live, acoustic version of ‘Hillbilly Love’ to share with all of you. May it inspire you, as it did us, to renew your appreciation and dedication to this ‘unique way of living’ they call ‘Hillbilly Loooove’…!" Aim Me & Renee - Troubadours Of Divine Bliss

HILLBILLY LOVE REVIEWS
"The unforgettably titled new single from Scott Holstein begins with a strum of an acoustic guitar that doubles as the tearing down of a gate for Holstein's beautiful and effectual baritone to ride into the ether.

"Hillbilly Love" sounds like the singer/songwriter's treatise on a life of productivity, generosity, and sensitivity. They call it hillbilly love, he declares with vocal thunder, You can't always win / but you can always do better.

Like a great cultural ambassador from the Southern hills, he co-opts the derogatory term for his own edifying purpose: When push comes to shove / Rise above / And show some hillbilly love.

The song's lyrical content is apolitical, and rather than public policy or electoral competitions, Holstein focuses on the virtues of honesty, authenticity, compassion, and selflessness. At a time when there is particular focus on the errors and misdeeds of the American South, "Hillbilly Love" serves as a hopeful and necessary reminder that kindness, and as Holstein puts it, a "cultural evolution" can come in many forms from many different people. There is no monopoly on goodness.

Musically, "Hillbilly Love" is as inviting as its sentiment. Holstein sounds like Randy Travis, and with certain phrasing "Elvis Presley" as he leads an outstanding band, featuring the accents of excellent country-style guitar, through an instantly infectious, up-tempo performance. No matter where you live, you can sing, dance, and raise a glass with "Hillbilly Love."


"It would be easy to dismiss Scott Holstein's latest single, "Hillbilly Love", as just another country novelty song. That is until you hear it. With steady drumming and some telecaster twangs backing up Holstein's unmistakably gruff baritone, the song starts midtempo and builds up quickly to a full on Bluegrass/Country barroom stomp.

Lyrically, with the song - despite the gimmicky title and chorus - is surprisingly genuine and relatable regardless of where you grew up. Pride, love, passion and self-awareness are all crammed into a span of less than four-minutes; "It's a state of mind, this hillbilly-ism, you've got to give it your all in the time you're given... When push comes to shove, we'll rise above and show some hillbilly love."

The single marks a strong step forward, for the Nashville (by-way-of-West Virginia) musician, building on the music of his 2015 debut, Cold Coal Town. It's not clear yet whether "Hillbilly Love" is a one-off single or a prelude teasing a follow up album. Regardless it's an endearing song that only grows on you with repeat listens."

~ John B. Moore has been covering the seemingly disparate, but surprisingly complimentary genres of Americana and punk rock for the past 20 years. Blurt/New Noise Magazine/InSite Atlanta/NeuFutur Magazine


"With a smooth baritone voice and symphonic Telecaster twang, Scott Holstein has crafted the perfect anthem for music fans to break out of their quarantine blues. Turning his focus to the simple yet faithful devotion of hillbilly love, Holstein invites listeners into his world, one full of humor, friendship, and positive vibes. "Hillbilly love, you can't always win," he sings in the chorus, "But you can always do better." Harkening memories of the great Merle Haggard or Waylon Jennings, Holstein gives fans a memorable track for the summer that will no doubt have them dancing around their living rooms as soon as the first strum hits their ears."

~ Chuck Armstrong is a pastor and writer living in New York City. As a contributor to The Boot, No Depression, Consequence of Sound, Ultimate Classic Rock, and Loudwire, music has always been part of Chuck's life. Formerly a longtime radio pro, Chuck now resides in Hell's Kitchen with his family.


"Hillbilly Love" is a Country Music song. Period. Contemporary Country radio stations play some great music these days but mostly, it ain't Country. I'm always happy when I hear a real Country song and "Hillbilly Love" makes me very happy. It reminds me of classic Waylon and Hank (Sr.) and though it would fit into a Classic Country playlist, it would also work in today's Country Music world. The uncomplicated lyrics celebrate a simple country lifestyle and above all, reminds us to share some "Hillbilly Love"!"


"Giving an amazing beat to the heart of "Hillbilly Love", Scott Holstein evokes a great evolution for our culture found in the souls of our independent spirits who rise above it all to do better for their community. The potent simplicity found in perfectly-penned words that reflect the importance of faith, family and friends is solidly layered upon an uplifting musical track that reflects a future country anthem speaking to the human spirit of anyone who has the rhythm of the mountains coursing through their veins."


"Scott Holstein's twangy new single "Hillbilly Love" harkens back to the Outlaw Country movement spearheaded back in the '70s by Willie, Waylon and the boys. His grumbly baritone offers a wry shout-out to those forgotten folks whose cultural revolution was written in the mountains and the stars.? Gritty electric guitars and keening lap steel, the song locks into a four-on-the-floor groove. Equal parts sincere and sardonic, it's the perfect antidote to the Summertime blahs."