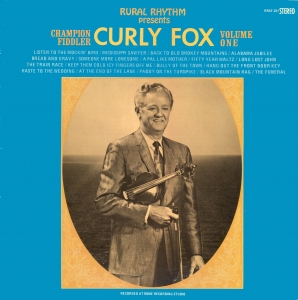 ORIGINAL ALBUM LINER NOTES: (Reprinted as is appeared on the back cover of the original album jacket)

The world of entertainment, with its colorful personalities and unpredictable ways, has in it the stuff that makes for greatness. One Such great champion fiddler and master showman – is CURLY FOX, one of the great performing talents of the era.

Born in a small country town, at Graysville, Tennessee, he began his career at Radio Station WSB, Atlanta, Georgia in 1932. For nearly four decades his artistry glowed in an unending succession of professional triumphs, whether it be any one of our colleges that they so often visit, or in auditoriums from the world famous Carnegie Hall, Constitution Hall, and The Grand Ol’ Opry, to the smaller arenas in the American Heartland. Curly teamed up with many great talents in his career, performing with the best. Such old time greats as Fibber McGee & Mollie, Lum and Abner, The Boswell Sisters, Rubinoff and his violin, and a real first for a “hillbilly fiddler”, Curly performed for royalty, King Paul and Queen Fredrika of Greece.

While appearing at Will Roger’s Auditorium during the Texas Centennial in 1936, one of the all-time great female Country and Western singers, “Miss Texas Ruby”, joined Curly Fox, forming a team of top performers. The Team later resulted in a man and wife team until her tragic death in a trailer fire, March 29, 1963, at Nashville Tennessee.

Many great performers are identified with one single instrument, it becomes their recognized trademark. Not so with Curly Fox. Curly plays any instrument that has strings plus some that don’t, harmonica, Jews harp, musical saw, etc. This album is faithful recreation of a Curly Fox concert. Everything that countless thousands of fans have enthusiastically responded to is here. This collection is a must for everyone who has seen and been conquered by the artistry of Curly Fox.

For those who have not been fortunate enough to see this wizard perform, it also indeed stands up as superb entertainment. There are countless numbers we regard as “his” greatest hits. It will surely include most of your favorites. Special thanks to Jack Casey, Dick Unteed, and Rome Recording studios for their efforts in making this album possible.
Uncle Jim O’Neal