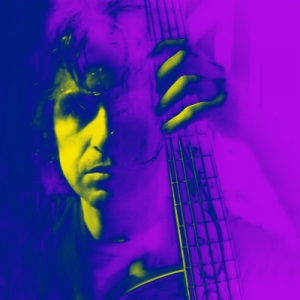 Overview
Training and professional studies
Composer, arranger, producer, multi-instrumentalist. Born in Argentina, Daniel Díaz has Spanish and Argentinean citizenships and speaks Spanish, English, French and Portuguese.
He studied music in Buenos Aires (theory, electric bass, harmony, counterpoint, ear training) and attended to several courses and clinics such as: orchestration with Carlos Franzetti, Improvisation with Gary Burton, Production and Bass with Pedro Aznar, Tango History and Language with Horacio Salgan, and Argentine folkloric rhythms with "Cuchi" Leguizamon.
In 1992 and 1996 he travelled the USA where he studied improvisation (with Bruce Gertz and Oscar Stagnaro at Berklee College of Music In Boston) and bass (with Mark Egan and Percy Jones in New York City and Alexis Skjlarevsky in LA.). In Paris he took upright bass classes with Michel Benita and François Rabbat.

Professional carreer
For 20 years he developed an important carer as a session and backing musician in Argentina and Europe, playing other instruments among with bass, and toured and recorded with many jazz, rock, fusion, Latin and Tango bands.
Simultaneously he worked an arranger, producer and musical director with many projects and artists the USA, Argentina and Europe.
Since 1997 he lives in Paris, France, where he continued both his session musician and his arranger/producer careers, recording and performing live all around the world. He played/toured/recorded with: Juan Carlos Caceres, Raul Barboza, Magik Malik, Minino Garay, Elise Caron, Francis Lalanne, Peio Serbielle, Jorge Chaminé, Teresa Berganza, Renaud, Miguel Angel Estrella, Tryo, Alfredo Arias, Cuerteto Cedron,  among many others.

Solo Career
From 1992 to 1997, in Buenos Aires, he played his compositions live with his own band, and started a solo recording carer with the worldwide release by North American label Green Linnet/Xenophile,of his first album "The Years Alone". In this album Daniel Diaz composed, arranged and performed 11 of his songs composed between 1986 and 1993. He played most of the instruments, but included guest appearances by some great South American players.

He continued this recording career with "Segundo Ciclo" (1997) released worldwide by Timeless Records, and 10 more albums released between 2000 and 2015.

Present time, Production music, Films/TV:
2006 - Present  Late 2005 he started working for French publisher Cezame/FLE as composer and producer-multi-intrumentalist for several albums on their catalgue (Music library).
He continues his work for Cezame and started a career as composer and multi-instrumentalist for films, TV and documentaries, working for some of the finest Music Libraries and Publishers in Europe, U.S.A. and Canada (Sonoton, Getty, APM, etc). More than 530 of his composition are licensed to these publishers worldwide.
He performs guitars and basses for the soundtrack of the film Undertow composed by Selma Mutal, and continues his work as composer for TV/Films.  November 2009: he composed and performed the original music for Tennessee William’s “Suddenly, Last Summer” directed by Réné Loyon.
In March 2012 he composes and performs O.S.T. for the short film « Quitte Ou Double »  by Alexandre Coffre featured on  Cannes festival 2012 (France).
In the present Daniel Diaz continues this new career as on demand film composer while he keeps playing live an producing at a reduced pace: concerts with Raul Barboza Trio and Norberto Pedreira Trio, and his own solo output.