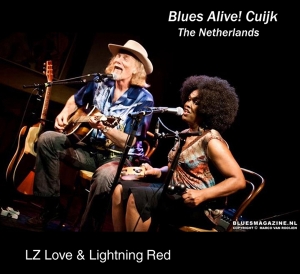 Together they've toured the world with appearances at the Rapperswil and Zofingen Festivals near Zurich, as well as concerts in Switzerland, Croatia and Germany. Chosen to close the 2010 Rapperswil Blues n Jazz Festival, they performed to a crowd of nearly 10,000, and their BLUES FAMILY release led to a 2012 tour of Europe.

As so many great American singers have, LZ love began singing gospel in a southern church…at age five. Having sung and toured with a long list of icons including Mary Wells, Joan Armatrading, Billy Preston (the 5th Beatle), Parliament Funkadelic, Luther Vandross and Stephen Marley, her credentials are impressive.

A favorite of Tommy Castro and Michael Fronti, her voice appears on their releases, as does theirs on hers. LZ Love's solo career began in 1995 when her song Lift Me Up reached number two on the European dance charts, and she continues to release soulful, vibrant albums to critical acclaim.

As a 3 year old, the legendary Chicago area bluesman Lightning Red would sit directly in front of the saxophone sections of Count Basie, Jimmy Dorsey, Duke Ellington et al, and after being mentored by Luther Allison and soaking up the sounds of Chicago greats, it was in Austin, Texas where his patented TEXICAGO sound emerged after rubbing elbows with names like Willie Nelson, Omar Dykes, Marsha Ball, WC Clark, Kim Wilson, Jimmie and Stevie Ray Vaughan.

Having begun his European adventures touring Denmark, Red’s latest releases and concerts are getting rave reviews internationally, and he continues to record and perform to an ever widening, enthusiastic audience.

When LZ LOVE and LIGHTNING, RED began their 2010 European tour with backing musicians from Croatia and Germany, they did not anticipate anything beyond a few weeks performing to enthusiastic crowds and adding many fans. But with each new festival and concert performance, it became obvious that something magical was happening. Strong friendships were forming and
great music was being created.

Recording sessions were set up in Split, Croatia and plans drawn up to form a world-class band. Due to contractual obligations with industry folks in London, Peco Pete was unable to join or record with the new Blues Family. With studio tracks in hand, the entourage headed to Germany to enlist the award winning drumming talent of Tom Diewock. German legend Ray Frick added vocal tracks to the emerging album of original songs and stands at the helm as executive producer.