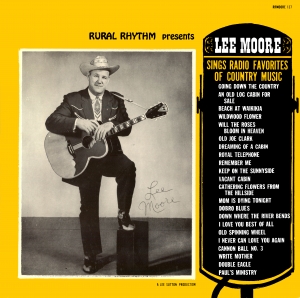 LEE MOORE (The Coffee Drinking Night-Hawk)
With over 50 years in business, Rural Rhythm Records has built a catalog that connects many dots from past to present. Since its 1955 creation, Rural Rhythm has released hundreds of classic performances by many legendary old-time country and early bluegrass artists such as Mac Wiseman, Hylo Brown, Jim Eanes, Red Smiley, Don Reno, Bill Harrell, Earl Taylor, J. E. Mainer, Mac Martin, Vassar Clements and many others. SINGS RADIO FAVORITES OF COUNTRY MUSIC by Lee Moore is part of that archival catalog and included in Rural Rhythm’s Heritage Collection series.

Walter LeRoy Moore, born September, 24, 1914 in Circleville, Ohio started his career singing on radio in 1931 while still in high school. He went on the road with Doc Schneider and His Texas Yodeling Cowboys, a travelling show, playing dobro and guitar. In the mid-30s, he sang with the Mountain Melody Boys, before moving to WRHS Charleston, as vocalist with Buddy Starcher’s Mountaineers.

After marrying Juanita Picklesimer, in 1938, he worked as a duo with his wife. For many years, they proved a popular act on various radio stations, including WCMI Ashland KY, WCHS, Charleston, WV and WHIS, Bluefield, WV, where he performed at the coal camps at night. He then moved to WSVA, Harrisonburg, VA, KNKF, Shenandoah, IA. After a few other stops he joined WWVA (1949-1974) were here he hosted the overnight show and often performed on the WWVA Jamboree. Lee Moore is best remembered as The Coffee Drinking Night Hawk for his successful radio years at WWVA whose show aired at 2 A.M. Insomniacs and long-haulers were a large part of his audience. Even after retiring from his radio show, he continued playing WWVA's Jamboree until 1974.

At the time, WWVA's nighttime signal was the only source of Country music for many fans in the northeast, and many New Yorkers listened to Lee. He received mail from listeners from Newfoundland to Bermuda. Lee was known for his coffee drinking routine, in which he would elaborately describe the preparation of his favorite beverage, as well as for commercials selling red top baby chicks, the Lord's Last Supper tablecloths and used work clothes.

He and Juanita divorced in 1960 but he stayed on the Jamboree as a solo act, until 1974. After leaving WWVA, Moore relocated to Troy New York and continued to play bluegrass festivals throughout the northeast until his death on August 17, 1997. Lee Moore was inducted into the Country Music D J Hall of Fame in 2000.

Lee Moore recorded for several labels over the years. SINGS RADIO FAVORITES OF COUNTRY MUSIC was Lee’s first album which he made for Rural Rhythm Records released in 1966. EVERYBODY’S FAVORITE, Lee’s second album was released in 1968 and included his signature song “The Cat Came Back”.

Produced by Lee Sutton for Rural Rhythm SINGS RADIO FAVORITES OF COUNTRY MUSIC pays tribute to old-time country standards many of which would have been heard at the legendary WWVA over Lee’s 25 year association. Lee Moore’s heartfelt and distinctive vocals are showcased throughout this 22 song collection of country standards and arranged with a full accompaniment including guitar, mandolin, 5-string banjo, dobro and acoustic bass.