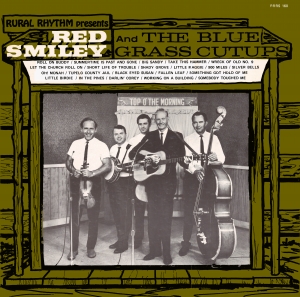 RED SMILEY and The Blue Grass Cut-Ups – RED SMILEY and The Blue Grass Cut-Ups (RUR-160) DIGITAL ALBUM
The warm, expressive voice of Red Smiley is one of the treasures of bluegrass music. With his longtime partner, Don Reno, he was an integral part of one of the all-time greatest bluegrass acts, although we catch him on his own in the autumn of his years. This recording, originally released in 1967, find him making a sweet return to the old time music that formed the bedrock of bluegrass.

Arthur Lee “Red” Smiley was born on May 17, 1925 in Asheville, North Carolina. His father was a schoolteacher and folklorist. The early brother duets made an impression on Red, and he joined one of the finest, the Morris Brothers, whose ranks later included Don Reno. Called up in 1942, Red served overseas and was critically wounded in Sicily when bomb fragments tore through his chest. After losing his left lung and spending two years in the Walter Reed Memorial Hospital, Red returned to North Carolina. He joined a band with Red Rector in 1946, and met Don Reno in December 1949 after Reno had spent a year as Earl Scruggs’ replacement in Bill Monroe’s Blue Grass Boys.

Reno and Smiley were recruited by fiddler Tommy Magness for his group, the Tennessee Buddies, and in late 1951 they left Magness, much as Flatt and Scruggs had left Monroe. Life got very hard very quickly, and Red spent much of Reno & Smiley’s early years as a mechanic with the State Roads Commission in Asheville. Their records appeared steadily on King, but there was insufficient work to otherwise support them as musicians.

Over Easter 1955, Reno and Smiley decided to give the music business another shot, and signed on at the Old Dominion Barndance in Richmond, Virginia. Then, as Don Reno recounted, "We moved to Roanoke [to host a weekday television show on WDBJ] and drove to Richmond every Saturday night for the Old Dominion Barn Dance until the spring of 1957. Our television show with our old friend [announcer] Irvin Sharp, called Top o’ the Morning, did so well they added one half hour to our show and the drive to Richmond got rough. We took over the WDVA Barn Dance in Danville, Virginia every Saturday night as soon as we left the Old Dominion Barn Dance [in December 1959]."

Live radio was giving way to Top 40, and radio barndances were folding as television took over Saturday night. The result was that bluegrass became marginalized. Reno & Smiley, though, were doing better than many of their contemporaries. They’d figured out television, and soon added another station, WSVA-TV in Harrisonburg, Virginia, to their schedule. The problem was that television restricted their touring, and while this suited Red it didn’t suit Don. Red’s reluctance to tour stemmed from health issues. He suffered from diabetes and lost a lot of weight.

Reno & Smiley split in November 1964. "Actually Dad left everything to Red," said Ronnie Reno. "He left the bus to Red. He felt like it was his decision to leave and that he should not leave Red in a lurch, or leave him anything other than what they had built together." In a 1971 interview, Red said, "Don and I never were enemies. With all honesty, Don and I never had a cross word."

This recording is the first of three LPs that Red and his Bluegrass Cut-Ups made for Rural Rhythm in the years immediately after the split. After his TV show was cancelled in March 1968, Red retired briefly before signing on with Don Reno and Bill Harrell in 1970. They performed and recorded together, and were in the middle of a tour when Red began suffering mild heart-attacks in 1971. Later that year, he was taken ill during a flu epidemic, and died on January 2, 1972, at the age of 47.

Red’s Bluegrass Cut-Ups comprised bassist John Palmer, banjoist Billy Edwards, Tater Tate on fiddle, and either Gene Burrows on mandolin. Red generously shared solo space and let his young sidemen step up to the mic. “Oh! Monah” is a pop song that bandleader Ted Weems cowrote and recorded in 1931. “Roll on, Buddy” had been recorded by the Monroe Brothers in the 1930s, and many times before that. No one, though, is sure where it originated. The Monroes also popularized “Darling Corey,” although again no one knows its origin. Usually treated as a breakdown, “Shady Grove” was based on a nursery rhyme, “Fly around My Pretty Little Miss,” that crossed the ocean with the first settlers.

The great black songster Huddie Ledbetter, a.k.a. Leadbelly, popularized “Take This Hammer,” a song he’d probably heard in the Texas prisons. During the 1960s, it became a folk revival classic. Turning to songs of Appalachian descent, we have “900 Miles,” another immemorial song that became a folk revival favorite. It sounds ominously redolent of other murder ballads, like “The Banks of the Ohio.” The close harmony on the choruses is exquisite. If Red Smiley schooled his young accompanists, he schooled them well. “Short Life of Trouble” was written or adapted by blind songster Dick Burnett, who claimed to have written “I’m a Man of Constant Sorrow.” First recorded in 1926, it was already a standard by the time Red’s former boss, Zeke Morris, recorded it, and the song survives in the hands of those who care about the old stuff, including Dave Alvin and Doc Watson. “In The Pines” is one of the great unsettling classics of American music, a song that has crossed all boundaries from Doc Walsh’s 1926 recording to Kurt Cobain’s haunting coda to his Unplugged appearance. In between, it has been recorded by Leadbelly, the Sir Douglas Quintet, Bill Monroe, and even became a 1964 hit for a Britpop group, the Four Pennies. Folklorists agree that it was probably cobbled together from several nineteenth century Appalachian songs. The “in the pines” refrain is one of the most evocative in American music.

And of course, like every good bluegrass show, this set includes some hymns. The vintage gospel classic “Somebody Touched Me” is a song that Bob Dylan often includes in his shows, and one that probably comes from African American sacred music, as does “Working on a Building.”

There is deep knowledge and true love of the old music embodied here. Red knew the value of these songs, and he is part of the chain by which they’re passed down to us and future generations. Truly music for the ages.
Colin Escott