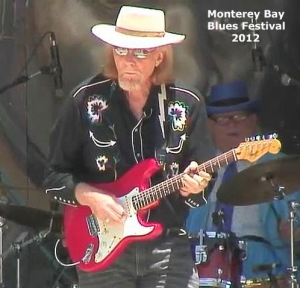 This legendary guitarist and songwriter has toured the world performing songs from his many recordings.
After appearing before an audience of nearly 10,000 in Switzerland and enthusiastic crowds all over Europe, his last release (Blues Family) recorded in Croatia and Germany with vocalist/songwriter LZ Love has garnered rave reviews and international, airplay.
Now, the new album RED’S ROADHOUSE is attracting music industry attention and creating fans all over the globe.

Lightning Red began his R&B musical training early…at age three. Every Saturday night in 1952, while his parents danced, he’d sit directly in front of the saxophone sections of Count Basie, Jimmy Dorsey, Duke Ellington and many of the big bands touring the military base circuit. Marveling at him, iconic musicians would bring Red on stage between shows to noodle on their drums or bang on the piano.
Then at age five he studied the piano, had an electric guitar by thirteen, and his band was winning talent contests within a few years time.

Toward the end of his teens, Red became a protégé of Luther Allison in Chicago, where he soaked up the sounds of Buddy Guy, Otis Rush, Mike Bloomfield, B.B. King, Johnny Winter and the local blues legends. Touring throughout North America followed, and in 1977 Austin, Texas became his home and touring base.

While performing at the Armadillo World Headquarters during the latter 70s, Omar and the Howlers, W.C. Clark and "little" Charlie Sexton were brought onstage and introduced their music to the community. Red also in the front row hearing the music of newcomers The Fabulous T-Birds (Jimmie Vaughan, Kim Wilson) at Antone's Club and met a struggling guitarslinger named "Little" Stevie Ray Vaughan.

His performances include the Whangarei Blues Festival in New Zealand, the Perth Blues Club in Australia, two years at the Great British R&B Festival, The Monterey Bay Blues Festival, the Bayfront Blues Festival, many House of Blues dates in Cambridge, repeat performances at Chicago B.L.U.E.S. in New York, the Rapperswil Blues’n’Jazz Festival near Zurich, and Blues Alive! Cuijk in Holland. He has toured the US & UK repeatedly, as well as Scandinavia, Ireland, Australia, Canada, France, Holland, Switzerland, Germany, Croatia and Denmark.