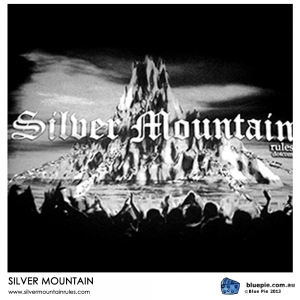 Often overlooked in the evolutionary process of what would come to be known as neo-classical heavy metal, Sweden’s Silver Mountain are one of the great Scandinavian cult bands of the 1980s. Named for the famous song by Ritchie Blackmore’s Rainbow, Silver Mountain was first assembled in 1978 by vocalist/guitarist Jonas Hansson, guitarist Morgan Alm, bassist Ingemar Stenquist and drummer Marten Hedener; but this lineup would be short-lived, splintering after releasing just one single called “Man of No Present Existence” in 1979 (now collectors-item).

Numerous local musicians sifted through their ranks and several blazing demos were released starting 1980 but it wasn’t until 1982 that a new record deal was finally struck with recently launched Dutch independent label Roadrunner Records. By then, a stable foursome consisting of Hansson, bassist Per Stadin, keyboardist Jens Johansson and his drummer sibling Anders Johansson, had been playing together for nearly two years, and the resulting chemistry was clearly revealed by the band’s 1983 album, the now underground classic Shakin’ Brains.

Effectively re-igniting the combustible union of metal and classical music where their original inspiration, Rainbow, had slacked off, Silver Mountain’s debut received rave reviews in most heavy metal magazines and promised great things to come. Even when Jens and Anders Johansson suddenly decamped to join Malmsteen’s nascent solo band the following year (ironically enough, they helped him sound more like Silver Mountain than any of his recent exploits), Hansson and Stadin simply rehired original drummer Hedener and drafted a full-time singer and frontman in Christer Mentzer.

Along with session keyboardist Erik Björn Nielsen, this lineup recorded 1984’s Universe where hysterical response in Japan led to 1985’s Hibiya –Live in Japan album. In 1988,Johan Dahlstrom (vocals) and Kjell Gustavsson (drums) joined the band and a more AOR-oriented album was made.

Silver Mountain folded shortly thereafter, with Hansson keeping busy throughout the 1990s as a soundtrack composer and his own Jonas Hansson Band. Then, in 2001, all four members of the group’s “classic” Shakin’ Brains decided to reconvene, turn back the clock, and record the not-surprisingly titled Breakin’ Chains LP for old time’s sake. In 2010 a Facebook group called “We who want to see Silver Mountain Live in Malmö” surfaced and the band decided to get together in various line-ups to do this show.

The show was filmed and resulted in: “Silver Mountain A reunion Live 2010”