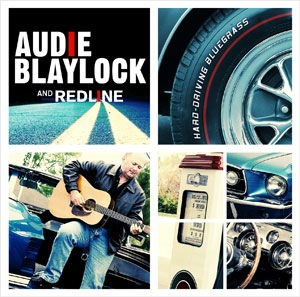 Audie Blaylock and Redline have been burning up the charts with their single, Lonesome Weary Heart and are looking forward to their new self titled album release in Jan 2009 from respected acoustic and bluegrass label Rural Rhythm Records. “No holds barred, take no prisoners, hard driving’ bluegrass, just the way I like it,” is how Terry Herd (Bluegrass Radio Network) describes this band comprised of Audie Blaylock on guitar/vocals, Patrick McAvinue on fiddle, Evan Ward on banjo/vocals, Matt Wallace on bass/vocals and Jason Johnson on mandolin/vocals. Blaylock and these young talented “hot pickers” bring the phrase “high energy” to a whole new level and have audiences on their feet time and time again.
Audie has long been a bluegrass hero to fans of the genre and cemented his reputation as a top notch player long ago, playing with some of bluegrass music’s most distinguished artists, including Rhonda Vincent & The Rage. Grammy® award winning producer, Carl Jackson says, “Audie Blaylock is one of the most talented folks in bluegrass music today. He’s a top-notch guitarist and vocalist and I’m very pleased to know there’s a new project on the horizon. When Audie is involved, you can bet the music will be bluegrass at its finest.”

In 2005 and 2006, Audie Blaylock and Redline were nominated for the IBMA Emerging Artist of the Year award. Since Blaylock began his career at age 19 when he joined Jimmy Martin and The Sunny Mountain Boys, he has received a multitude of other honors and awards including: the IBMA Entertainer of the Year award as a member of Rhonda Vincent & The Rage; 2007 IBMA Instrumental Group of the Year Award with Michael Cleveland and Flamekeeper featuring Audie Blaylock; a Grammy® nomination for Best Bluegrass Album and an IBMA nomination for Recorded Event of the Year for A Tribute to Jimmy Martin: The King of Bluegrass;" and so many more. Audie Blaylock has also performed with the legendary Red Allen, The Lynn Morris Band and songwriting great Harley Allen, J.D. Crowe, Paul Williams and Kenny Ingram.
With the release of his first solo CD, Trains are the Only Way to Fly, Country Standard Time said: "From the opening title cut to the finale,” Pages of Time," there is no mistaking Audie Blaylock's music as anything but hard driving, traditional-style bluegrass."
Things have not changed since that first CD. This brand new, Rural Rhythm release is set to turn the bluegrass world on its axis, presenting a refreshed, enlivened and ready to jam Audie Blaylock and Redline and a band that is in the position to take center stage.