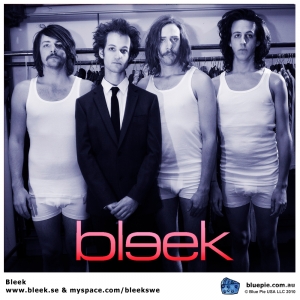 Swedish Rock Gods "Bleek" are ready to take on the world. With a sound that echoes the influences of bands like: Fleet Foxes, Coldplay, Pink Floyd and the song writing skills of legends like Bob Dylan and Bob Seeger, this band is creating global sound waves that brought them to the attention of Blue Pie.

The band comprises of Martin, Robin, Andy and Gustaf. With Martin Nobel on guitars, (Martin's great great grandfather was the brother of famous Swede Alfred Nobel) Martin’s guitar sounds provides the band with a distinctive Swedish Rock Sound. Martin started playing guitar at age 13, and he now makes his living as a freelance studio and live guitarist; Robin Rhodin is on lead vocals and keyboards. The Rhodin family has been in the entertainment business for 150 years, over 5 generations and Robin started playing the piano at age 5, he has since played in numerous orchestras and bands in theatres’ and circuses, various cover bands, a bluegrass band, and a few pop/rock bands, often together with Martin; Andy Rhodin is on drums. Andy is Robin's little brother, and started playing drums when he was 8. He has studied drums under Peter Wildoer, from world famous death metal band Darkane, and one of Scandinavia’s top jazz and swing drummers, Roger Berg. He has also played drums and percussion in theatres and circuses, and of course with Martin and Robin in their different projects; Gustaf Berggrensson is the resident Bass man. Gustaf was the last to join the group, after Robin abandoned the bass in favour of keyboards, to broaden the sound. He's grown up in a family of musicians and is known as one of Malmö's top bassists.. The band was extremely happy to welcome Gustaf on-board. This is the band now known as "BLEEK"

Robin and Martin have been writing and playing music together for almost 10 years, with over a hundred co-written songs and several hundreds of gigs together. Andy has been a part of that cooperation for 5 or 6 years, resulting in a couple of hundred gigs between that 3/4 of Bleek. Andy and Gustaf became friends when they worked together in the music shop. Martin and Robin run a small recording studio together, where they record local bands. Martin has been in charge of the recording of the 12 tracks recorded for the Bleek album written by Martin and Robin, arranged and co-produced by all four Bleeks' during the period of September '09 - May '10. The band are dedicated to one thing and that is all things that lead to "BLEEK" and their music being taken to the world for their army of fans to enjoy and for new ones to be converted to the ways of the "BLEEK".

Bleek’s first single to be lifted from their debut album is called “This Intoxication”. The single has been featured on the soundtrack for ‘The Argues The Movie’ see www.thearguesthemovie.com and another of their new songs will be featured in the new Aussie drama “Dealing with Destiny” see www.dealingwithdestiny.com . This single was produced by the band and Damien Reilly. Blue Pie is VERY excited to have this HOT Swedish band on the label and we look forward to massive global success.

You can check out and download "BLEEK" at all iTunes stores around the world. Get "Intoxicated" now on "BLEEKS" audio drink for your ears with the first single “This Intoxication” produced by Bleek and Damien Reilly.

Bleek are a Blue Pie Records USA artist and are published by Blue Pie Publishing USA.