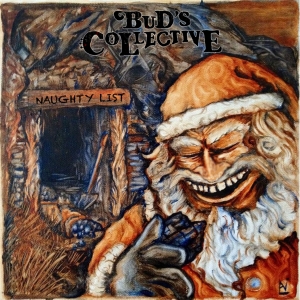 Bud’s Collective is a dynamic group of pickers and singers from the Eastern Panhandle of West Virginia. With deep roots in Bluegrass music, they are not afraid
to venture off the beaten path and play songs by Bill Withers, Tom Petty, Alabama, Django Rhinehart, Johnny Cash and many more, while maintaining
an energy that is all their own. The group also features a long list of original material written by band leader and guitar player, Buddy Dunlap.

What began as a "throw together group of whoever Buddy could collect,” quickly turned into one of the hottest bluegrass bands in the DC area. Since it’s inception in December
of 2012, Bud’s Collective has played with the likes of Ricky Skaggs, Loretta Lynn, Rhonda Vincent, Sierra Hull, Larry Sparks, Peter Rowan and Frank Solivan and Dirty Kitchen j
ust to name a few. The band took first place in the 2013 DC Bluegrass Union Band Competition, and second place in the 2014 SPBGMA Band Competition in Nashville.

Bud’s Collective has released three albums, all in 2015. In March, “Bluegrass in the Barn-Live at Capon Crossing Farm” was the first album for the group. It featured a live
performance in Wardensville, WV where Buddy resides and holds a monthly concert series under the same title. The album showcased original and traditional material, and also
demonstrates the liveliness of Bud’s Collective’s show.

In May, after a few weeks in the studio, Bud’s Collective finished up their first studio album. Self titled, “Bud’s Collective,” this album covers the bases with over half of the songs being
original to the group and the rest being crowd favorites. Bass player, Cody Brown, is featured singing lead vocal on the old Grateful Dead song, “Rider” and Jack Dunlap’s original mandolin instrumental,
“Monterey Jack,” really shows off the bands ability to get your feet moving. Gina Clowes’ banjo playing is as smooth as silk, with a powerful drive mixed with some of the tastiest licks you’ll
ever hear.

Bud’s Collective, in collaboration with National Media Services in Front Royal, Virginia, has recorded a nine song Christmas album available in the Fall of 2015. "Naughty List" features
six originals from the band and three you may already know. They held nothing back when coming up with arrangements and took the liberty to add whatever instrument was needed for
each song. The band delves into a little Irish, country, swing and a few other genres while putting their own little twist on Christmas. This is a totally unique, must have album for the Christmas
season.

Bud’s Collective is continuing to make waves in the music world playing festivals all around the DC area and beyond. They are going into their third straight year of monthly Bluegrass in the Barn shows with
crowds growing to 400+. They plan to return to the studio again in 2016 and also release another Live album.