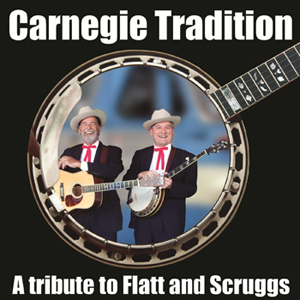 **Note to the Deejays** Carnegie Tradition is part of the stage show, Wayne Taylor's Legends of Country and Bluegrass. Carnegie Tradition's CD is a close representation of the music played on the Carnegie Hall Concert of 1962 by Flatt and Scruggs. We wanted to present the music, especially Earl Scruggs banjo parts, as near perfect as possible including a few missed notes.
Our banjo player, Donnie Little, tabbed out every note exactly the way Earl played it on the show. Hard core bluegrass fans truly appreciate this authenticity.

“Carnegie Tradition” – A Tribute to Flatt and Scruggs was recorded at the Legendary Studio East in Charlotte NC.
Wayne Taylor is the band leader and Lead Vocals/Rhythm Guitarist for this Tribute to Lester Flatt, Earl Scruggs and the Foggy Mountain Boys. The focus is on their 1962 performance at Carnegie Hall in New York City.
Wayne was 18 years old when he first saw Lester Flatt perform at a festival in Spruce Pines, NC. It was then that Wayne noted Lester’s professional performance and decided that he would commit to becoming a professional musician. Over time Wayne spent a lot of time playing Bluegrass music and then served in the US Navy for 25 years of which 21 years he was the lead singer and rhythm guitarist for the Navy Band’s “Country Current,” which provided the opportunity for World travel with many performances at the White House. After serving our nation, Wayne becomes a prolific songwriter and performer. Bluegrass music would become a mainstay. In an extensive story by Yvonne Tatar, Bluegrass Unlimited referred to Wayne as a modern-day Troubadour.
Donnie Little (Banjo/Vocals) comes from a musical family and is an excellent Banjo player who has been entertaining fans for many years. Don Reno and Earl Scruggs had a profound impact on Donnie’s early life. Donnie recalls his family recording at the Arthur Smith Studio in Charlotte (now the Legendary Studio East). They recorded Joy Bells and Orange Blossom Special for a 45 release. Arthur Smith was the engineer, and Don Reno played the banjo.
Warren Yates (Bass/Vocals) is the bass player and the design and engineering talent behind Yates Banjos which have become a desirable and noteworthy contribution to the world of Bluegrass Music. A Yates pre-war style banjo, named “The Carnegie” is featured on this CD.
Ronnie Black (Mandolin/Vocals) a Statesville, NC native is steeped in bluegrass and adds significantly to the traditional sound.
Ron Stewart (Fiddle) a multi-talented award winning musician from Indiana added some magnificent fiddle playing.
David Johnson (Dobro) can be heard on numerous recordings dating back to the Arthur Smith Show. David added just the right touch to round out this tribute project.

Tim Eaton with the Legendary Studio East brought his seasoned skills to this CD and with his signature of excellence we can all set back and enjoy a well performed and well produced recording.

Carl White (Host and Producer of Life in the Carolina's TV show).