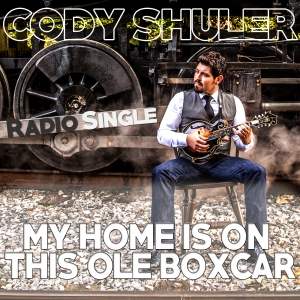 Nashville, TN (November 13, 2014) – Rural Rhythm Records and Cody Shuler have enjoyed a successful association since 2008 when the Dove nominated gospel album Pickin’, Praisin’ & Singin’ was released by Cody Shuler & Pine Mountain Railroad and debut #3 on the Billboard Bluegrass Album Chart. Six years later Rural Rhythm is proud to announce the single release “My Home Is On This Ole Boxcar” written and performed by Cody Shuler.

“It seems like Bluegrass lovers never get tired of hearing train songs. Maybe because it takes them back to another place in time to when trains were the fastest way to run from something, come home, or just ride. A lot of people would like a life of just traveling from place to place with no worries, that's what this upbeat song is about, a Hobo with his only home an ever moving boxcar”, says Cody Shuler.

“As a songwriter, Cody Shuler continues to add to his catalog of great material with "My Home Is On This Old Boxcar". I always look forward to hearing his latest creations! As an artist, Cody continues to expand his horizons with the ability to combine tradition with innovation. This new single is the perfect example of that...the story of the old hobo on the boxcar, delivered with a more contemporary approach. While listening, you may just find yourself becoming a bit jealous of the old hobo with his worry-free travel and no need to have a watch. Fine singin' & pickin'. Friends, enjoy!” -
Cindy Baucom, "Knee-Deep In Bluegrass

“Cody Shuler is back! He has a new CD coming from Rural Rhythm and if the first single is any indication it is going to be GREAT STUFF! The single written by Cody is “My Home Is On This Ole Boxcar” and got those classic elements that makes it a keeper, it’s a train song, it’s a hobo/rambler song, it’s a story song, but mostly it’s a great bluegrass song. It’s got all you look for in a traditional bluegrass tune and best of all it’s got Cody’s vocals driving it down the track. It has been too long since we heard from him and he’s still got it! Welcome back Cody Shuler!”-
Gene Skinner, Great Stuff Radio Network

"My Home Is On This Ole Boxcare" is available now on AirPlay Direct and will be included on the new Rural Rhythm FRESH CUTS & KEY TRACKS Radio CD going out to radio this week.

Cody Shuler has written or co-written a multitude of hit songs over the years in the Bluegrass and Gospel music genres including; “Clementine”, “Cindy Mae”, “My Eyes Shall Be On Cannan’s Land” and “Do You Wrong Kind Of Girl” and the Grammy ® nominated song “Big River” performed by Daily & Vincent to name a few. Many of these hit songs have reached the top of the Bluegrass Today and Bluegrass Junction - SiriusXM radio charts.

Cody has been collecting a strong group of original songs he has written and the time is right for him to release these special songs on his first solo album early in 2015 on Rural Rhythm Records. The album will showcase the singer / songwriting talents of Cody Shuler and feature some of the top musicians in the Bluegrass community, including past members of Pine Mountain Railroad.

Cody has owned and managed the band Pine Mountain Railroad since 2006. He has played some of the biggest stages in Bluegrass and Gospel music including, The Grand Ole Opry, Merlefest, The National Quartet Convention and many, many more. Cody Shuler will be touring heavily in 2015 with Cody Shuler & Pine Mountain Railroad to promote his new solo album. Visit www.pinemountainrailroad.com for a complete list of tour dates.
10
What's This
Advertisement