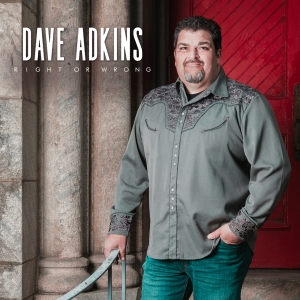 If you've ever met Dave Adkins, you might find yourself
surprised to find the larger-than-life persona on stage is
exactly that off stage, as well. He's a powerhouse of
talent, and his vocals, songwriting, and excitable stage
presence simply astound audiences, drawing them
in almost instantaneously within the first few moments of
a live performance experience.
Right Or Wrong personifies everything that makes up
Dave Adkins. The album kicks off into high gear with
“Blue Blue Rain” - a surefire future hit with fans who lean
more toward the traditional side of bluegrass. Following
suit are “Him And West Virginia,” “Roll Little River,” and
the album’s successful first single, “Blood Feud
(Hatfields & McCoys),” a duet/co-write with Larry
Cordle. But beyond the traditional sound that Dave
presents so well on this new album for Mountain Fever
Records, are some real gems that touch the heart and
show the softer side of Adkins. “Goodbye Caroline” is so
melodically beautiful that you almost forget it’s a song
about leaving. And “I Can Only Imagine,” a remake of
the very popular song first recorded by Christian rock
group Mercy Me, is anything but a copy of the original.
Dave effectually delivers each lyric with true
believability, poignancy, and heart. As with all of Dave’s
earlier releases, Right Or Wrong showcases his craft
as a songwriter, but it’s important to note Dave’s
penchant for being part of an incredible songwriting
community that includes Jerry Salley, Eli Johnston,
Blake Grisham, Greg Preece, Bart Millard, Terry
Foust, Mitchell Brown, Carl Caldwell, Craig Lackey,
Kenneth Johnson, Ray Bruce, Daniel Salyer, Dave
Morris, and Dawn Kenney, all of whom have credits on
this project.