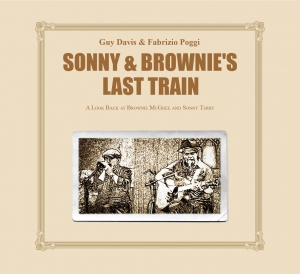 Brownie McGhee and Sonny Terry were two musicians whose work will not be surpassed, let alone improved on. This musical opus, to which you are listening, was produced by Fabrizio Poggi. It features our combined musical talents, and is not meant to compete with the originals. It's meant to be a love letter to Brownie and Sonny signed by the both of us.

They were two of my favorites.

Sonny had the easy job of being a harmonica genius who grew up in or near Raleigh-Durham, North Carolina and who was discovered and presented at Carnegie Hall by John Hammond in 1938. The audience never seemed aware of the exhaustive amount of practice that it takes to be that good. They only knew that fun and delight seemed to emanate from him as he played his whoopping harmonica.

Walter Brown McGhee was from Knoxville, Tennessee. Brownie’s star began to take shape after the death of Blind Boy Fuller. One has only to listen to him to hear that he was every bit as good, every bit as inspired, as Lightnin Hopkins, Josh White, and John Lee Hooker. He was known for his own acoustic sound that made him distinct from people like Big Bill Broonzy, Lonnie Johnson, T-Bone Walker and Reverend Gary Davis. And his voice… strong without being forceful, or soft and sweet like honey. His right thumb worked the bass strings independently of his fingers on the treble, with a result that was so balanced and homogenized that you don't think of the skill it takes to produce such a banquet of sound.

Sonny and Brownie together sounded divine. They were often musical running buddies with Leadbelly, Woody Guthrie, Pete Seeger, and many others associated with the old left-wing folk movement. Their talent and skill shined so brightly, including on Broadway, New York City, in 1947, when Sonny was featured in the musical “Finian's Rainbow” as a character named "Sunny”. Then Sonny and Brownie were both featured on Broadway in “Cat on a Hot Tin Roof” a few years later.

The whole was greater than the sum of the parts. Sometimes, Brownie didn't get to shine in his own brilliant way, standing next to Sonny. I don’t think anybody could have. Though Sonny could do amazing tricks with his harmonica, he needed the grounding of good, rich singing and great guitar playing to keep him from being perceived as just a one or two trick pony.

This duo of geniuses was fated to stay together as a unit even through times when they didn't want to be. I think they grew to resent needing to be together for recognition.

Both Fabrizio and I are harmonica players who worship Sonny Terry. I’ve long admired the complete musicianship of Brownie McGhee. I first saw the two of them in a 1981 production called friends of Leadbelly in New York City. Years later Brownie came to see me in Oakland where I did a production of my play, “The Adventures of Fishy Waters: In Bed With The Blues”. I was quite honored. Somewhere there is a grainy video of him standing up near me in the audience and then speaking with me after my stage performance.

In 2009, I got a break I could not have foreseen. The musical “Finian's Rainbow” was revived on Broadway in New York City. I got cast as “Sunny”, the part that Sonny Terry originated, way back in 1947.

I have gotten to perform Sonny Terry's part in Finian’s Rainbow three times. Once for Encores, once for the Irish Repertory Theatre, and once at the St James theater on Broadway… All three in New York City.