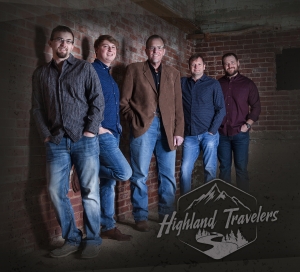 Members of two very popular bands in bluegrass, The
Boxcars and Ramblers Choice (Junior Sisk's sidemen)
have joined to create a new ensemble into one mecca of
musicians to form the Highland Travelers. With Adam
Steffey (mandolin), Keith Garrett (guitar), Jason Davis
(banjo), Kameron Keller (bass), and Gary Hultman
(dobro), the Highland Travelers, who state they like to
"stay true to our traditional grass roots while creating new, original songs, as well as putting our stamp on our classic favorites," will no doubt set their chosen genre on its proverbial ear.
Their self-titled debut album is exactly what one would
expect from world-class, career musicians - pure
excellence. Their first single, “The Little Tennessee,” has already made its chart debut on Bluegrass Today’s Top 20 (March 2018) and is a perfect representation of an album
chock full of great material. With compositions written by
noted bluegrass songsmiths including Tim Stafford, Eli
Johnston, and Josh Miller interspersed with country
classics written by Dolly Parton, Skip Ewing, Faron Young,
and Roger Miller, this album does not lack in substance.
Add in a couple of originals penned by band members
Garrett and Davis, and you’ll find yourself with a catalog of future bluegrass standards.
And although the Highland Travelers are a new formation,
it won’t come as any surprise that they are already
comfortable in their own band voice: easily recognizable
with the signature mandolin and banjo style of Steffey and
Davis respectively, and Garrett out front vocally. With
Hultman and Keller adding the “just-right” support, The
Highland Travelers will find their way into your hearts
before you even know what’s hit you.

Adam Steffey is surely one of the most recorded mandolinists in bluegrass over the last 20 years.

He has traveled and recorded with Bluegrass acts such as- Alison Krauss & Union Station, Mountain Heart, and The Dan Tyminski Band, and The Boxcars- where he has been featured on both mandolin and lead and harmony vocals.

Keith Garrett grew up in the community of Citico in East Tennessee. His earliest and possibly most important musical influence was his dad, William Garrett, who taught Keith to play the guitar at the age of thirteen. Almost immediately he was drawn to the music of such greats as Tony Rice, Keith Whitley, the Bluegrass Album Band, Doyle Lawson & Quicksilver, and Ricky Skaggs, and he soon began playing with various local and regional bands. In 2000 Keith became a founding member of Blue Moon Rising, an East Tennessee based bluegrass band that received national acclaim and was nominated for “Emerging Artist of the Year” in 2006 by the International Bluegrass Music Association. As a member of Blue Moon Rising, Keith continued to hone his talents and earned himself a place alongside some of the best singers and songwriters in bluegrass. In December 2009, Garrett became a founding member of the Grammy nominated band, The Boxcars, also receiving several IBMA awards such as, “Emerging Artist of the Year” in 2011, as well as, “Instrumental Group of the Year” in 2011, 2012, and 2013.

JASON DAVIS
Banjo
Bluegrass music has been part of Jason’s life since he was very young. He first heard bluegrass when he was about nine years old while listening to music with his uncle, Thomas Davis. His uncle began taking him to local bluegrass festivals, and around a year later, Jason decided he wanted to learn to play banjo. His first gig on the road was at age fourteen with Michelle Nixon & Drive. He also spent time as a teenager playing with Kenny & Amanda Smith Band, Blueridge and Grasstowne. He has spent the last eight years playing with Junior Sisk and Ramblers choice. Jason has also released two solo albums, Stepping Out and Second Time Around, the first of which was nominated for IBMA Instrumental Album of the Year in 2009. While he’s not on the road with the band, he can be found teaching banjo in the Bluegrass, Old Time, & Country Music Studies program at East Tennessee State University and doing private lessons as well. Jason enjoys spending time at home with his wife Grace and hunting and fishing when he can.

Kameron is a native of Greeneville, Tennessee who has spent a number of years playing bluegrass music both regionally and nationally. Prior to joining Junior Sisk & Ramblers Choice, he played bass for Alan Bibey & Grasstowne and has also spent time with The Darrell Webb Band. Keller was a member of the nationally acclaimed band, Junior Sisk and Ramblers Choice for several years, which has enjoyed much success in the IBMA awards as well as on the radio airwaves. Kameron also works as an estimator for Creative Masonry in Greeneville, TN.

Gary Hultman grew up hunting, farming, and fishing on the Canadian border in the small town of Birchdale, Minnesota. He was Introduced to bluegrass when his family formed a band that he played with from the age of 10 until he left home to attend East Tennessee State University. Through the Bluegrass, Old Time, and Country Music Studies program, Hultman had the opportunity to share the stage with many of his musical heroes such as Adam Steffey, Tim Stafford, Doyle Lawson, and Ricky Skaggs, as well as travel overseas to Japan with ETSU’s Bluegrass Pride Band for a short tour during the summer of 2014. Rob Ickes’ ResoSummit in Nashville has been especially influential to Hultman through the years via the encouragement of staff members like Michael Witcher, Sally VanMeter, and Rob Ickes. In recent years, Gary has also had the privilege of returning to ResoSummit as a staff member. Until December of 2017, Hultman spent 4 years as a member of the Grammy nominated band, The Boxcars. When not playing music, Hultman works as a realtor in Tennessee and enjoys hiking with his wife Ashley and their dog, Dolly.
26
What's This
Advertisement