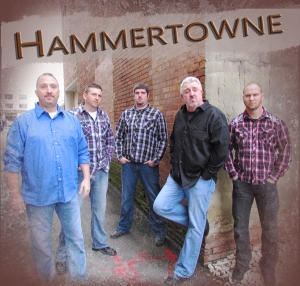 Hammertowne is a five man group that originates in the “cradle of bluegrass music” of the Eastern Kentucky foothills. Although this group is relatively new as a unit, this is a well seasoned and talented group of performers who can lay claim to performing with some of the finest talent in bluegrass music throughout their careers. From its inception, the group’s identity has been defined by a hard-driving style of bluegrass that combines unique instrumentation with a distinctive knack for weaving vocal harmonies. Hammertowne creates their hard driving sound with one foot in the traditional arena to honor those who paved the way before them, and the other in the progressive arena as reflected in their many original songs they write and perform. Hammertowne has recently joined the fold at Deep River Management, which books and promotes some of the finest bands in the business, and has inked a deal with Mountain Fever Records to release their first CD.

Guitarist Scott Tacket had this to say about forming the group:
In the summer/fall of 2011, I was working with a band that I had founded in 2002. That group had decided to record a CD, and we had been working on it for a couple of weeks when philosophical differences led us to disband and stop recording. Armed with what I thought was first rate material, I decided to record a solo project and began to think of pickers I knew and admired to join me in recording. I had known all these guys from various meetings in bluegrass venues, and had even played with some of them in other groups. Dave and I are from the same hometown and I had known him personally for quite some time, but only in the last 4-5 years had I become familiar with his musical abilities, and we had become close friends Doug was the bassist/tenor singer in the first group I had ever played in, and I had “jammed” with Brent on a number of occasions. I had watched Chaston, Dave’s son, practically grow up at bluegrass festivals dragging around a mandolin and was amazed at the musician he had become at such an early age. So my first call went to Dave Carroll, who assured me that Chaston would be onboard with the idea of recording as well. I called Doug and he agreed, as did Brent. The amazing thing was that we hadn’t rehearsed any of the material AT ALL…Dave and Chaston knew the songs that Dave had written but we hadn’t rehearsed them as a unit. On the days we spent tracking, we would run through the song, and it was like we had been playing and singing together for years. After the recording was done I had some shows booked that I was contracted to play, so we decided that we had so much fun in the studio that we would take this unit out to do some live shows. A group of friends gathered in a studio to work on a solo project, and something special was formed…Hammertowne!
23
What's This
Advertisement