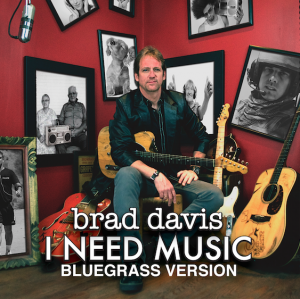 Currently Brad is the co-writer with Paula Breedlove of song titled "Forth & Goal" cut by Terry Baucom & Dukes of Drive that is currently #1 on Bluegrass Today Chart! Brad Davis is known for his original amazing Double-Down-Up guitar technique and voted 2012 Texas studio musician of the year award. Brad Davis is releasing his first record on Louisiana Hayride Records in Feb 2017 titled “I Need Music.” He has created some amazing music and is touring with his bluesy grass band. Brad Davis opened up for Billy Bob Thornton and the Boxmasters on their 2016 state side tour. Brad has also appeared on Leno, Conan, The View, Good Morning America, Letterman and Jimmy Kimmel, Grand Ole Opry.
Career Highlights:________________________________________________
Brad is the featured instrumental, vocal talent and producer on CMH's current tribute to the hits of the 80s that has the approval of ToTos' Steve Lukather!
Current Official Bluegrass Valley Record Release Brad Davis "A
Bluegrass Tribute to George Jones,"
https://itunes.apple.com/us/album/bluegrass-tribute-to-george/id771420886 https://soundcloud.com/bluegrassvalleyrecords/sets/brad-davis-a-bluegrass - tribute
2013 was year that marked a purposeful return to Brad’s first love, Bluegrass Music! Brad launched ‘Walk On Faith’, a critically acclaimed Bluegrass Gospel project the drew attention from the Bluegrass and Gospel music genres. Here are some of the 2013 highlights:
Official Bluegrass Music Video Release of “Never Give The Devil A Ride” Concept Video: http://youtu.be/kZxVYy30Fhs
                                 
Video Released to Social Media on Oct 22, 2013 Garnering National Press Coverage: http://bluegrasstoday.com/never-give-the-devil-a-ride-video-from-brad- davis/ http://www.prescriptionbluegrassblog.com/2013/10/bluegrass-gospel-hit- now-video.html
“Never Give The Devil A Ride” Video Will Made Its National Television Debut Saturday, Oct 26, 2013 on Nashville Country Revival, a popular music oriented show airing on national networks such as Daystar, The Nashville Network and others. It has been aired many times since:
www.nashvillecountryrevival.com
‘Walk On Faith’ Album released on Airplay Direct: www.airplaydirect.com/walkonfaith (Note: ‘Walk On Faith’ was in the Top 50 ADP Global Radio Chart for October 2013 among ALL genres)
Reviews of ‘Walk On Faith’:
http://digitaljournal.com/article/356744 http://www.musicnewsnashville.com/brad-davis-walk-faith
Radio Success: Singles From the Album, ”Road To Emmaus” and ”Never Give The Devil A Ride”, Charted Across Multiple Genres of Music with nationwide #2 airplay from XM Radio, Salem Music Networks and including
Artist Website: braddavismusic.com
Management: BMG Nashville
Norm Blanchard www.NashvilleBMG.com 615.636.5409
17
What's This
Advertisement