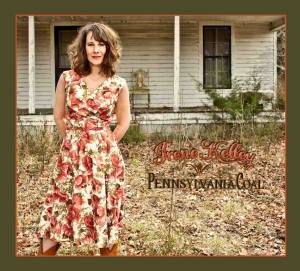 "With a stylistic kinship to Dolly and Emmylou, Kelley's sweet vocals glide gently over the lilt and pluck of banjos, fiddles and mandolins, taking her bluegrass trappings into folkier terrain. EVERY SONG'S A GEM." ~ BluegrassSituation.com

"[Pennsylvania Coal is] AN EXQUISITE MIX OF BLUEGRASS, COUNTRY, and FOLK, and it showcases the GRACE and DEPTH of both her SINGING and her WRITING."
~ The Philadelphia Inquirer

"This woman is making the BEST MUSIC OF HER CAREER. This is Irene Kelley's first album in ten years and is possibly one of the best and most rewarding albums I've heard this past year."
~ Maverick Magazine

We call a collection of songs an "album," and never has the term been more apt than in Irene Kelley's new bluegrass powerhouse, "Pennsylvania Coal." It's like leafing through the generations of a family photo album, while Kelley lovingly fills in the details and fleshes out the characters.

One photo is literal. On the back cover is a 100-year-old shot taken at the mouth of the Crabtree, Pennsylvania coalmine, and among the miners is Kelley's grandfather. Her title song is both centerpiece and fountainhead for the stories that follow. From this first-generation American tale of hardship and struggle comes the strength, hope and humility shown in the lives of succeeding generations.

Kelley goes "back to her ('grass) roots" on this project. A bluegrass album with top bluegrass players has been on her "bucket list" since her days singing at the Bean Blossom and Clinch Mountain festivals in the 1980s. With seven-time Grammy winner (and longtime Ricky Skaggs bassist) Mark Fain producing, legendary pickers such as Stuart Duncan and Bryan Sutton, and a cast of singers including Rhonda Vincent, Claire Lynch and Trisha Yearwood, that dream has come true in a very big way.

Not all the contributors are big names, though. Not yet anyway. Kelley's talented daughters Justyna and Sara Jean are all over "Pennsylvania Coal" as singers and co-writers, reinforcing family ties in songs where they are often enough part of the story.

Kelley herself had an early start. At 19 she took offense to fellow 'grassers singing the praises of Virginia, North Carolina, Tennessee, etc. and took it on herself to write a song defending the rural beauty of her native state. "Pennsylvania Is My Home" opened many doors, from a PBS documentary to a grassroots campaign for a Pennsylvania State Song senate bill, and eventually to Nashville, where she lives today.

Things happened fast following that 1983 move -- demos for CBS Records, a staff writing deal with music publisher Polygram, Carl Jackson’s cut of "You Are a Rock (and I’m a Rolling Stone)," and a CMA Award-winning single for Ricky Skaggs & Sharon White, "Love Can’t Ever Get Better Than This."

Kelley's abilities as a singer and writer led MCA Records to cut an album on her in 1989. Despite a chart single of her own on "You Are a Rock," the album was never released. Kelley swallowed her disappointment and focused on the songwriting that had become her bread-and-butter, with a host of country and bluegrass artists (Loretta Lynn, Trisha Yearwood, Rhonda Vincent, The Whites, etc.) taking her songs out for a spin.

Singers sing, though, and in 1999 Kelley co-produced and self-released her album "Simple Path' to critical raves. Alan Jackson heard her sing "A Little Bluer Than That" on the Opry and included it (with Kelley adding harmonies) in his 5-time platinum Album of the Year, "Drive." Four years later Kelley issued the album "Thunderbird," a well-received chronicle of personal struggle.

"Pennsylvania Coal" follows in those footsteps, taking dead aim at the truth, not some audience demographic. "I’ve gone back to my story," says Kelley. "There’s no pressure about what’s going on in the market, but at the same time, I think that sort of thing captures an audience. It’s like Loretta Lynn – she never strayed from her story.”

And so it is with this coal miner’s granddaughter. Irene Kelley's story – and her family's – resonate and reward in this exhilarating new collection. From the teenaged enthusiasm of "Pennsylvania Is My Home" to the mature wisdom of "Pennsylvania Coal," Kelley’s life comes full circle. Musically and spiritually, the new songs connect past and present, exploring themes of home, love, love lost and more, and, in a line from the title song, "leaning on the backbone" of past generations.
41
What's This
Advertisement