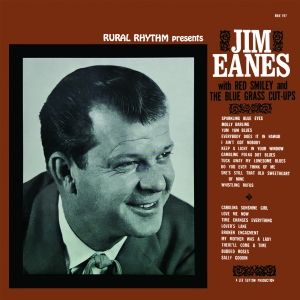 JIM EANES with RED SMILEY & The Blue Grass Cut-Ups
Jim Eanes, known as Smilin' Jim Eanes, was an influential figure in both bluegrass and country music for over five decades. He was born Homer Robert Eanes, Jr. in Mountain Valley, Virginia and received his first guitar at age nine from his banjo-picking father. Jim Eanes spent his early years playing square dances with his father's informal string band. At age sixteen he joined Roy Hall's Blue Ridge Entertainers at a Roanoke radio station.
Eanes began his career in 1948 with Flatt & Scruggs, then Bill Monroe and the Blue Grass Boys. Starting his solo career in 1949, he had a hit record with "Baby Blue Eyes" on Capitol Records. He organized the Shenandoah Valley Boys in 1951 and recorded a few singles before signing with Decca Records.
Decca groomed him to play country music and received good chart success with several singles such as, “I Cried Again”, “Rose Garden Waltz” and “Little Brown Hand”. Eanes wrote many of his own songs including “Your Old Standby”, and one of his best "I Wouldn't Change You If I Could," which became a number one hit for Ricky Skaggs in 1982.

When Red Smiley decided to retire in the late 60’s, Jim Eanes took over the band and renamed it the Shenandoah Cut-ups. In the early 90’s, emphysema caused Eanes major problems but, in spite of his health issue, he continued to make some local appearances and even completed an album with his old friend Bobby Atkins for Rural Rhythm titled Heart Of The South in 1991.

Jim Eanes died of congestive heart failure in the Blue Ridge Center, Martinsville, Virginia on November 21, 1995. His fine vocals and songwriting over the years earned Jim Eanes the universal nickname of The Bluegrass Balladeer.