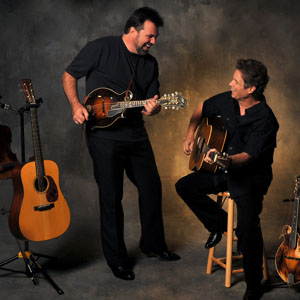 With Mark Newton and Steve Thomas banded together, the "sideman" has become a "frontman," and the "frontman" is now a "partner." Both men are native virginians who both struck out seperately in the music business decades ago, with both having completely different experiences. Now that both of their paths have converged they are eager to blend their various musical flavors together to share with bluegrass and Americana fans everywhere. They are joined by bass player Matt Wallace who rounds out the trio that will be touring the country.

Mark Newton was born into a musical family and he became interested in bluegrass and county music at the early age of six after the family moved to Fredricksburg, VA. In 1983 Newton teamed up with Rickie and Ronnie Simpkins and Sammy Shelor to form the Virginia Squires, a band which would go on to record five albums. Newton then went on to perform with the Tony Rice Unit and The Seldom Scene. In 1997 Newton teamed up with Bill Emerson and recorded A Foot in the Past, A Foot in the Future for Pinecastle Records, solidifying his Pinecastle pedigree. Newton is especially proud of his project, Follow Me Back to the Fold, which is a tribute to women in bluegrass that won IBMA's "Recorded Event of the Year" in 2001. His most recent album, Hillbilly Hemingway, was nominated for an IBMA award in 2007.

At an early age Steve Thomas started playing in his father's Gospel band with members of their church. That early experience and an influential championship fiddle player propelled him on to play with the Roanoke Youth Symphony and then he cut his chops with Roanoke area bands East Virginia Grass and The New Grass Revue. Thomas has won best fiddler awards at numerous championships as well as being an award winning mandolin player. Thomas teamed up with Tim Austin to form the Lonesome River Band as well as stints playing with Del McCoury, Jim & Jesse and the Virginia Boys, The Whites, The Osborne Brothers, not to mention country stars like Aaron Tippin, Brooks and Dunn, LeeAnn Womack, Kenny Chesney, John Michael Montgomery, Ronnie Bowman, and Lorrie Morgan.

So it is that sideman Steve Thomas and frontman Mark Newton have now become partners and are poised to serve up their bluegrass and country inspired music to the masses. When the two men got together and heard the results, they couldn't resist teaming up together.