Mercyland Hymns For The Rest of Us 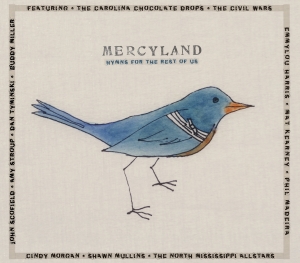 " Not all hymns are found in the pocket on the back of the church pew. Here are some for your consideration from folks who set up their tent out in the left part of the field." Emmylou Harris

On Mercyland: Hymns For The Rest of Us out April 24 (Mercyland Records), producer and writer Phil Madeira set out with an initiative to affirm the common ground and positive qualities of faith. In an expansive and spacious conversation through song, artists The Civil Wars, Shawn Mullins, Buddy Miller, The Carolina Chocolate Drops, Madeira, Mat Kearney, Cindy Morgan, Amy Stroup, The North Mississippi Allstars, Dan Tyminski, Emmylou Harris, and John Scofield contribute 10 original and 2 traditional songs.

“When I was a young boy, my mother played me the music of Mahalia Jackson, which introduced me to the reality of a bone chilling, soul-stirring music that made everything else pale in comparison,” says Madeira. “ These were joyous odes that sang of the love and the dignity of all humanity. Over the years I was saddened to see how often the differences of personal beliefs were highlighted in the mainstream dialogue.”

So he gathered together a diverse group of musical friends who wanted to put out a positive message that perhaps God is just love. The end result is a collection of songs of varying philosophies and beliefs, be it in a higher power, humanity, or the joy of music itself. Simply put, Buddy Miller says, “This is a beautiful record.”

Phil Madeira is a songwriter, producer, musician and singer. His songs have been recorded in all genres by such artists as Buddy Miller, Alison Krauss, Toby Keith, Ricky Skaggs, Bruce Hornsby, Keb' Mo', Garth Brooks, The Nitty Gritty Dirt Band, Shawn Mullins, The North Mississippi Allstars, and many others. As a multi-instrumentalist he plays guitar, accordion, piano, Hammond B3, lap steel, and more. Known for his work with the acclaimed Buddy Miller, Madeira has appeared with Solomon Burke, Elvis Costello, Dave Matthews, Vince Gill, Boz Skaggs, Patty Griffin, and he is currently a member in Emmylou Harris' band The Red Dirt Boys. He received a Humanitarian award from ASCAP in 1986 for raising consciousness and money for the Ethiopian hunger crisis. He is also the recipient of a Dove Award for Country Song of the Year and a Juno Award for production.