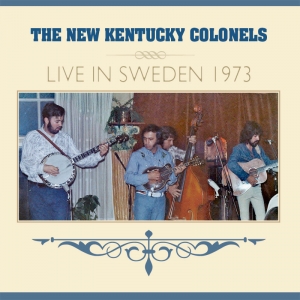 Features 26 Classics by Roland, Clarence and Eric White and Alan Munde
It's been 43 years in coming, but at last a complete recording of the New Kentucky Colonels' Live In Sweden 1973 has arrived. The album spotlights at their artistic peak two of the most innovative architects of modern bluegrass music—brothers Roland and Clarence White.
Roland, the Colonels' senior founder and an alumnus of Bill Monroe's Blue Grass Boys and Lester Flatt's Nashville Grass, holds a Distinguished Achievement Award from the International Bluegrass Music Assn., earned for both his wizardry as a mandolin player and his work as a music educator. Groundbreaking guitarist Clarence White, an originator of the West Coast country rock sound and former member of the Byrds, was recently inducted into the Bluegrass Music Hall of Fame.

TWO NIGHTS IN STOCKHOLM
Captured in two successive nights at the Mosebacke club in Stockholm, the 26-song CD also showcases the stellar ensemble contributions of brother Eric White on bass and Alan Munde on banjo. A 14-song edition of Live In Sweden 1973 was released on vinyl by Rounder Records in 1976.
Assessing the powerhouse pickers on that long-ago Stockholm stage, music critic Peter Cooper observes, "They were propulsive and virtuosic and amazing, and they thrilled the folks that heard them. They even thrilled themselves."
Roland agrees. “In my opinion, this is the best playing of Clarence’s on record. I know it was the best music I ever made.”

FROM COUNTRY BOYS TO COLONELS

The tour that took the Colonels to Sweden reunited the three White brothers, who had played in a family band throughout their formative years. Initially calling themselves the Country Boys, the Whites evolved into the Kentucky Colonels as the group lost and added members. When they reassembled for the European tour, they dubbed themselves the New Kentucky Colonels.
Even in their Country Boys incarnation, the Whites were world-class instrumentalists. Andy Griffith recognized that fact and featured them on two of his early shows. (Their youthful vitality and musical mastery shine brilliantly in this YouTube clip taped nine years before they enchanted their Swedish audience: https://www.youtube.com/watch?v=RpKhWePGNPc.)

AFTER THE FOLK BOOM

The end of the folk music boom scattered the Colonels in different creative directions. Roland moved to Nashville to play guitar with Bill Monroe and His Blue Grass Boys. Clarence stayed in California, creating a new country rock style of electric guitar playing and recording sessions with many artists. He joined, then toured and recorded with the Byrds. Eric also stayed in California and played sessions and bluegrass and country gigs. By the end of 1972, Roland had spent 22 months with Bill Monroe and then played mandolin in Lester Flatt’s Nashville Grass for four years. Roland says, "When Clarence called to say he had quit the Byrds and maybe we should join forces again, I was ready!"
Less than two months after the Stockholm concerts, however, Clarence was struck by a car and killed outside the Palmdale, California club where he and his brothers had just finished playing. Roland has kept the soul and high spirits of the Colonels alive while creating a phenomenally fruitful solo career—performing, recording, teaching, mentoring young musicians, contributing to the bluegrass community and demonstrating the loftiest standards of musicianship. He now leads the Grammy-nominated Roland White Band.

Live In Sweden 1973 is a cornucopia of bluegrass, country, pop and folk songs new and old. Here is the complete list: Fire On The Mountain, Never Ending Song Of Love, Banjo Boy Chimes, Good Woman’s Love, Sally Goodin, Mocking Banjo (Duelin’ Banjos), Old Joe Clark, You Won’t Be Satisfied That Way, Shenandoah Valley Breakdown, I’m Blue, I’m Lonesome, I Know What It Means To Be Lonesome, Blackberry Blossom, Why You Been Gone So Long, Alabama Jubilee, Dark Hollow, Take A Whiff On Me, Last Thing On My Mind, Soldier’s Joy/Black Mountain Rag, If You’re Ever Gonna Love Me, John Henry, The Prisoner's Song, I Am A Pilgrim, Salty Dog Blues, New River Train, Rawhide and Roll In My Sweet Baby's Arms. Recorded originally by Claes Bergstrom, the tracks have all been re-engineered and re-mastered.
"Across decades and oceans, the music is present,” Cooper declares. "It sustains and endures."

Live In Sweden 1973 will be available at http://www.rolandwhite.com on November 15, with pre-release sales to be announced via list emailing--sign up on the website to be included.

Physical copies of the CD will be mailed the week of October 17 to DJs in our list, and to any other DJ who requests one. To request a copy or to schedule an interview with Roland White, please contact Diane Bouska at dianebouska@comcast.net.