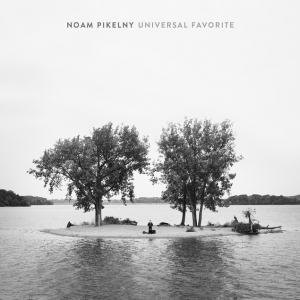 Universal Favorite is the fourth record Noam Pikelny has released under his own name, but it’s truly his solo debut. His previous efforts—including 2011’s Beat the Devil and Carry a Rail and 2014’s landmark Noam Pikelny Plays Kenny Baker Plays Bill Monroe—were full-band affairs that revealed his abilities as a dynamic bandleader while reinforcing his reputation as an inventive accompanist. The new release features only the man himself, playing lovely originals and covers that showcase his unique approach to the instrument and compositional flair. He recorded them live in the studio without accompaniment, coaxing a wide array of sounds and colors out of his instruments, embracing the challenges and exploring the new possibilities of the solo setting.

And, for the first time in his long and illustrious career, Pikelny even sings. It turns out he has a striking deadpan baritone that conveys humor and melancholy in equal measure. This album, he says, is “my musical manifesto. It’s the most personal statement I’ve put forward. The setting couldn’t be more stark and I think it lays bare my musical core. At times it’s autobiographical, as these songs I gathered illuminate the path I’ve traveled so far. Most importantly, it’s an incredibly honest solo album, in that there are honestly no other people on this record other than me.”

The idea for this sort-of-debut was born out of a solo tour Pikelny launched in early 2016. Punch Brothers—the Americana supergroup he co-founded in 2006 were taking a break after the release of their innovative 2015 album Phosphorescent Blues, and he took the opportunity to play some shows by himself. “It’s hard to say whether I started doing the one-man solo show because my bandmates were starting families, or if they were starting families because I was doing solo shows and were then inspired to seek greater meaning in their lives as well? We’ll never know, because when someone tells you that they’re having a baby, the proper response is not, ‘Why?’”

It was, however, not simply a case of a sideman taking centerstage. Pikelny may be a seasoned musician—arguably the finest banjoist of his generation, a three-time Grammy nominee and the winner of the first annual Steve Martin Prize for Excellence in Banjo and Bluegrass—but he realized that his experience was solely with duos, trios, quartets, and quintets. “I had never played solo on stage—not even for a song. Not once in my life. I never really thought of the banjo as much of a solo instrument; I thought it shone best in collaboration. It began to dawn upon me that if I was instead playing piano comfortably in a five-piece band, I would likely see the piano as an unsuitable solo instrument. Eventually I realized that this was a cop-out and that any good musician, if he finds himself in front of a room full of people, should be able to hold his own with just his instrument and his voice. It was clear to me: If I can stand on stage with a five-piece band to a sold-out Beacon Theater, why couldn’t I stand on stage solo and play to a nearly empty bar?”

He proved that much and more with the tour, for which he assembled a loose set list of new originals and carefully chosen covers by Josh Ritter, Elliott Smith, Roy Acuff, and Roger Miller. “Taking the show on the road really helped break the ice for me. I was able to see the reactions on people’s faces and test the material to see what worked and what didn’t. Having an audience to teach me how to do this was crucial to the process. It confirmed that there was something here, something special and personal that I could deliver in this intimate setting.” Playing solo allowed Pikelny to reconsider the banjo and how he played it, to develop new techniques and new compositional strategies. During a solo set, “you get to hear the banjo in so much detail, and I think there were some surprising elements that people don’t expect. Most people think the banjo is such a staccato instrument where the notes just die immediately, but I had a rare opportunity to exploit the warmth and sustain a banjo can have.”

In Fall 2016 he took those songs into the studio with his fellow Punch Brother, Gabe Witcher producing and longtime Punch engineer, Dave Sinko recording. Otherwise, Universal Favorite is all Pikelny. Opener “Waveland,” named after a street behind the leftfield wall of Wrigley Field, is the sound of a curtain rising, his fingers spidering over the frets, notes like scalloped edges of a great proscenium arch, leading into “Old Banjo” like a dramatic monologue. While he has never been tied to a whipping post after buying wine in Lynchburg, Virginia, the song has personal meaning for the player, as it is one he has been listening to and playing for most of his life. “That song was the very first track on the very first album I ever personally owned. When I was eight, my dad took me to a record store and he bought me this record by a Chicago folk singer named Fleming Brown, called The Little Rosewood Casket… and Other Songs of Joy. That should give you a picture of how my musical life started. It explains a lot. I still have a copy of that album, with my eight-year-old’s handwriting on the back: Property of Noam Pikelny.”

These are highly personal songs—not in the confessional mode, but in a way that maps his adventurous and wide-ranging tastes. He first performed Josh Ritter’s “Folk Bloodbath”—a clever and ultimately heart-rending mash-up of several old murder ballads—when Punch Brothers opened for the Idaho-born singer-songwriter in Boston a few years ago, and joined him on stage for the encore. Understated and thoughtful, Pikelny’s version hinges on his deep voice and thoughtful choice of instrument. “I’ve been told many times that the key to singing is finding material that suits your voice. Well, my voice has been described as funerary, and this song offers some serious bang for its buck. Exceptional funerary value.”

To convey the sense of mystery in that song, he chose an unusual instrument: a resophonic four-string guitar made by National in the 1920s. “It has three metal cones acting as the soundboard. I stumbled upon one once at a guitar shop and was impressed with its ethereal and velvety tone. I did some research on it, and one of the experts on these instruments said this model, when it was introduced in the 1920s, ‘served no musical purpose and that remains true to this day.’ So of course, I had to have it!”

An obsessive collector of vintage instruments, Pikelny is fascinated by the insights they provide into bygone days—the way these objects connect the present with the past. He chose the instruments on Universal Favorite carefully, including the ’53 Fender Telecaster on “My Tears Don’t Show” and the ’38 Kalamazoo KG-11 flat-top guitar on “Sweet Sunny South.” Most of the album was performed on a Gibson banjo that was made in Kalamazoo, Michigan, in 1941, but was found in the 1980s in a pawnshop in Johannesburg, South Africa, and repatriated back to the U.S. Its tone is rich and earthy, and its tale is captivating: How did this object travel halfway around the world and back again? “Each of these instruments has a unique story and has known the world much longer than I have. Picking them up makes me feel more connected with generations that have come before. Perhaps this bond with old instruments that are filled with character and charisma makes performing solo feel less lonely.”

In fact, the album title was inspired by a banjo made around the turn of the century by the S.S. Stewart company. It was their most popular model of the era, so they named it “Universal Favorite”—a bold marketing move that more than 100 years later elicited a laugh from Pikelny. “I stumbled upon an old catalog of theirs and saw the words ‘Universal Favorite’ and thought, ‘That is the most audacious thing I’ve ever seen. Who would have the gall to make a product and officially name it ‘Universal Favorite?’’”

Universal Favorite carries a great deal of history, yet it remains relevant and bears the artist’s own innovative touch. “I’ve always loved the ability of a great bluegrass or country song to conjure up days gone by but simultaneously be current and ripe for reinterpretation. And the real power is that when music really does its job, when it fully resonates, our world becomes more interconnected. It cultivates a community of people who share in that response. That community can be encapsulated on stage within an orchestra or within a five-piece band. That bond can be between one person standing alone onstage and the people in audience.”

Pikelny will engage that community throughout 2017, with more truly solo dates on the horizon: just him and his banjo. “As long as I have my instrument, I can put on a show, whether it’s on a stage or in somebody’s backyard. It’s been very liberating to realize that.”