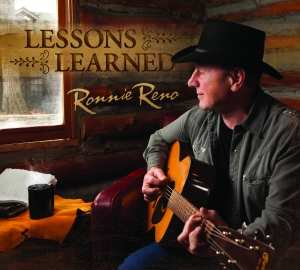 “LESSONS LEARNED” is the perfect album title for artist / songwriter / TV host / 2013 IBMA “Broadcaster of the Year” RONNIE RENO and his debut album on Rural Rhythm Records. Reno’s singer / songwriting talents really shine on this 11 song album containing 9 songs penned by Ronnie Reno. Each song tells a story about life, love and relationships that pull from his rich experiences that date back to the 60‘s Reno’s 50 years as an artist, songwriter and TV host.

Ronnie has had one of the most colorful, diverse and distinguished careers in the music industry. On the country side, he
has toured as an opening act and band member for Merle Haggard, toured with Mel Tillis, done studio work for
Johnny Cash, Conway Twitty and Willie Nelson, and written hits for both Haggard and Twitty. On the bluegrass
side, he spent several years providing part of the trademark harmonies of the Osborne Brothers.

As a boy, Ronnie became part of bluegrass greatness when he picked up the mandolin and joined his father’s band. His dad, Don Reno, happened to be one-half of Hall of Famers Reno and Smiley, and young Ronnie was part of many of the act’s great recordings in the ‘50s and ‘60s.

TRACKS:
1. LOWER THAN LONESOME
2. LESSONS LEARNED
3. I THINK OF YOU
4. SWEET ROSA LEE
5. DEEP PART OF YOUR HEART
6. RENO’S MANDO MAGIC
7. TRAIL OF SORROW
8. ALL THAT’S WORTH REMEMBERING
9. OUR LAST GOODBYE
10. BAD NEWS AT HOME
11. ALWAYS LATE (with David Frizzell)