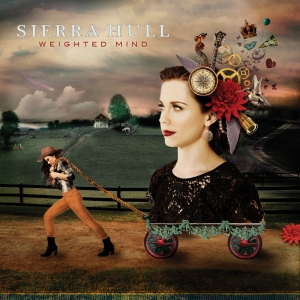 This is the turning point.

This is where a preternatural talent becomes a natural woman.

“She plays the mandolin with a degree of refined elegance and freedom that few have achieved,” says Bela Fleck, the genre-leaping banjo master who produced Weighted Mind. “And now her vocals and songwriting have matured to the level of her virtuosity.”

Alison Krauss, who has won more Grammy awards than any female artist in history, says of Hull, “I think she’s endless. I don’t see any boundaries. Talent like hers is so rare, and I don’t think it stops. It’s round.”

Hull came to us as a bluegrass thrush, a teen prodigy. Krauss called her to the Grand Ole Opry stage when Hull was 11-years-old. Two years later, she signed with Rounder Records, and soon became known as a remarkable mandolin player, a tone-true vocalist, and a recording artist of high order. She made two acclaimed albums. She played the White House, and Carnegie Hall, and the Kennedy Center, and she became the first bluegrass musician to receive a Presidential Scholarship at the Berklee College of Music.

She was celebrated, yet adrift. Stranded, even.

“In some way, I was needing to run from the thing that everybody thought I was being,” she says now, at 24.

But she wasn’t running so much as plodding.

She fielded myriad opinions about hypothetical courses. She grew vulnerable, and weighted, and she wrote songs about all of that. She found solace in an antique Brenda Ueland book that advised, “Everybody is original, if he tells the truth, if he speaks from himself.”

And she talked with Krauss, the childhood hero who had become an adult confidante.

“Sierra did well in music very fast and very young,” says Krauss. “Sometimes when that happens, people don’t want you to change. It’s, ‘We know you as this, and now you’re scaring us.’ But there wasn’t a question about what she wanted. She just needed somebody to listen to her and say, ‘What you have to say is valuable. If this is what you feel and what you want to say, you wait until you get to say it.’”Krauss also suggested she talk with Fleck.

“Sierra lives in the border area where new ideas mix to create hybrids, and sometimes brand new directions,” he says. “Her own voice was quietly telling her something that was hard to hear over all the advice she was getting.” Fleck asked her to play him her new songs, without accompaniment: Just voice and mandolin.

“Even when I was fronting a band, I’d always been an ensemble player,” Hull says. “To do something by myself made me rethink everything.”

And so she rethought, and she found new ways to play the new songs she’d written. In short time, what had been arduous now seemed genuine and innate. C.S. Lewis’ quote about how “the longest way round is the shortest way home” made sense. And a dazzling and atypical album was made possible.

Hull’s songs did not remain bare of all but mandolin and voice, though those are the essential elements here. Bass marvel Ethan Jodziewicz came on, providing resonance and rhythmic complexity. Fleck’s banjo adorns the courtly “Queen of Hearts/Royal Tea.” And Krauss, Abigail Washburn and Rhiannon Giddens add enchanting harmonies.

Bluegrass roots inform and inspire this soundscape, but bluegrass does not define or limit Weighted Mind. This is not bluegrass music, or chamber music, or pop music. This is original music, from a virtuoso who tells the truth and speaks from herself.

“If you won’t go where I’m going, then I’ll have to go alone,” she sings. “Choices and changes/ I’m tired of trying to be someone else.” Then she unleashes an octave mandolin solo—first fluttering, then tense and troubled—that could come from no one else.

Hull wrote eleven of Weighted Mind’s twelve songs (and she arranged the twelfth tune), penning some with co-writers Jon Weisberger, Zac Bevill, and Josh Shilling, and writing “Stranded,” “Wings of the Dawn,” “Birthday,” “Lullaby,” “I’ll Be Fine,” and “Black River” on her own.

“The moment you start to be yourself, there’s an honesty about that, that people connect with,” she says. “This album feels like the story of my early twenties, of that searching. Now, it feels like everything worked out the way it was supposed to.”

“I’d like to say to you, ‘Come follow,’” Hull sings on “Compass.” “But you may find my heart’s been hollowed out.”

Now, she knows. If her heart was hollowed, it was only so it might be filled anew, and then revealed. Welcome to a Weighted Mind, at ease.
43
What's This
Advertisement