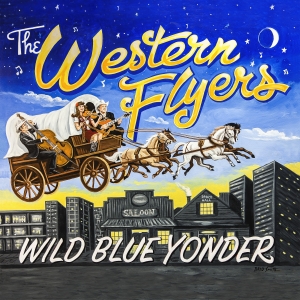 In 1940s Texas, if you wanted to court a girl after a long day on the Texas oil rigs, you sought out the nearest dancehall. Dusty, gin-soaked, and boisterous, the hall was driven by the Western Swing it bore; jazz, blues and swing standards melded with cowboy songs and electrifying old-time fiddle tunes. Legendary fiddler and band leader Bob Wills was king in this world and the dancehalls and theaters of Texas were buzzing with great fiddlers and singers, creating a new sound that would define Southwestern roots music for decades to come. More than seventy-five years later, The Western Flyers’ debut album, Wild Blue Yonder, explodes with the influence of this storied genre, and if Bob Wills was listening off-stage he’d be smiling in approval. Internationally-renowned guitar master Joey McKenzie drives the train with his powerful rhythm, reigning National Swing Fiddle champion Katie Glassman’s improvisation astounds, and world-class upright bassist Gavin Kelso adds fuel to the fire. A blending of tradition and innovation, Wild Blue Yonder is a singular music experience; a fresh take on a venerable American art form performed by three virtuosos of the genre.

Recorded at Mighty Fine Productions in Denver, CO by Colin Bricker, the album captures the polished authenticity of Western Flyers, and their dedication to the quality of the music. “That was really important to us,” says Glassman. “We didn’t want to make a fantasy record with a bunch of bells and whistles.” And really, this trio doesn’t need any crutches. Not only does it have one of the best swing fiddlers in the world and one of the best upright bassists in the world, but McKenzie is a legendary presence in the world of Texas swing. In fact, Glassman was just a kid when she first met and played with Mckenzie, creator of The Quebe Sisters Band and mentor to young talent. “We began jamming together and I would always ask him to back me up at fiddle contests,” Glassman said, “I always admired Joey and his love and knowledge of Texas fiddling and Western swing.  He is a virtuoso rhythm guitarist and a true student of upholding the integrity, quality and tradition of Western swing and Texas old-time fiddle music.”

Western Flyers’ brand of Western Swing has the lyricism and charm of Count Basie’s swing, the nostalgia of Bob Wills, and the spurs of Haggard and Willie Nelson’s country roots. Recorded using vintage Neumann, Telefunken and RCA ribbon microphones, vintage tube preamps and other equipment from the era, Wild Blue Yonder recreates the rich sounds their favorite recordings from the 30's and 40's. Western Swing is the flask of fine, energizing whiskey in the saddlebag of American music, as timeless as it is vintage.

"I love The Western Flyers. They are a fearlessly dedicated band that swings hard. Joey, Katie and Gavin, in the words of Handsome Harry, "Lay it down where it stays down till they leave town". Their music makes me smile. When I listen to them play I know that I am in the presence of modern masters in motion. Here's to the Wild Blue Yonder and all points in between". -MARTY STUART