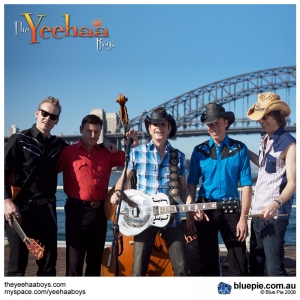 The Yeehaa Boys are one of Australia’s premier country swing bands. Collectively they have had over 9 number one singles in the ARIA Charts with all the band members being attached to multiple platinum selling albums. They have played live to millions of people around the world.

While putting the band together, front man Fitzy would celebrate the end of a good rehearsal session with the infectious cry of, Yeeehaaaa and the band soon got known through friends, buddys and rehearsal studios as The Yeehaa Boys, which after much discussion was embraced by the band who adopted the name as their own.

In mid 2006 the band teamed up with Keith Urbans producer Peter Blyton and recorded their first EP Playin 8 Ball with the single rocketing to No.18 on the National Country Music charts. The music video was shot at the legendary Basement in Sydney, and soon became one of the most requested clips on the Country Music Channel.

Later that year The Yeehaa Boys were invited to tour Malaysia, Indonesia, Singapore and Thailand. Due to the success of the shows in Asia a version of the EP was re-packaged in Taiwanese by GTO. Upon their return, The Yeehaa Boys fine-tuned their act with some sensational live performances in Australia. The culminated in three nights at the prestigious Toyota 2007 Country Music Festival.

The band recorded their second EP with Peter Blyton titled Shake Baby (do Ya Stuff), at 301 studios in Sydney. The record was released through MGM/Green/Blue Pie Records in August 2007 to a huge response. Country Music Television picked it up immediately and true to form, aired the clip 2-3 times on a daily basis. The clip was filmed using green key & CGI animation to give a surreal effect of the Australian outback and features native flora and fauna, not to mention the obligatory “Yeehaa Girls”, incorporating a fully choreographed original “Texan swing” dance routine.

The reaction was overwhelming, with invitations to perform on Australia’s largest free to air morning television show, not to mention the headline act for the official 75th Sydney Harbour Bridge anniversary celebrations.

2008 saw the boys return to the studio for six weeks, culminating with the release their self-titled Album The Yeehaa Boys a hybrid sound with roots back to the 40s, mixing Country Swing with a blend of country rock and blue Grass. The Yeehaa Boys established themselves as Australia’s premier country swing band. Collectively they have had over 9 number one singles and top ten hits, a hit album and have played live to thousands of people around Australia and broadcast to millions around the world all thanks to their great videos and music.

So, if you’re after a rootin tootin good time, round up a posse of desperadoes & come on down to where its all happenin’ with The Yeehaa Boys!