Thomm Jutz - Crazy If You Let It 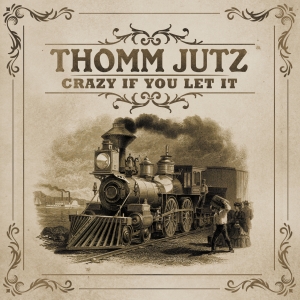 
In Nashville, there are countless tales of extraordinary creativity, talent, and determination unfolding everyday. But even in a city known for its creative, talented, and determined citizenry, Thomm Jutz is standing out.

He can’t help it. His name is right there, on the songwriting credits of four #1 bluegrass hits since April, 2016. And his name is on nine other top-20 bluegrass songs over the same period.

That name -- Thomm Jutz – is also right after the word “Producer,” on more than twenty albums over the past five years. Albums by Country Music Hall of Famer Mac Wiseman, folk legend Nanci Griffith, fabled country-punk Jason Ringenberg, Grammy-nominated duo Eric Brace & Peter Cooper, Otis Gibbs and many more, all recorded at his own TJ Tunes Studio just outside Nashville.

It’s a name no one in Nashville would know if 11-year-old Thomm hadn’t been sitting in front of his parents’ television on October 1, 1981, in Buehl, Germany, when the weekly program “It’s Country Time mit Freddy Quinn” came on. Allowed to stay up, Thomm watched Freddy Quinn’s guest that Thursday night -- renegade country artist Bobby Bare -- sing two of his biggest hits, “Detroit City” and “Tequila Sheila.” And that’s when everything changed for Thomm.

The piano and flute lessons slipped off the calendar, and the guitar lessons began. Seeing Bobby Bare on that small TV screen, strumming the simplest chords on his acoustic guitar as he sang “Last night I went to sleep in Detroit City,” sparked the wildest dream in young Thomm, there in Germany’s Black Forest: He was going to move to Nashville.

Fast forward 33 years, and there’s Bobby Bare standing in front of a microphone in Thomm’s studio, singing a song that Thomm wrote, and hearing the story about “It’s Country Time mit Freddy Quinn.” Yes, that happened. But that’s getting ahead of things.

Before that could happen, Thomm was an 11-year-old boy with a brand new guitar he couldn’t put down. The hours and hours of practicing led to his first band at age 16. More bands followed. Blues bands, rock bands, Elvis impersonator bands (really). He began writing songs, tearing apart the hits his bands were covering, and learning to create new ones from the inside out. He began working in local studios to absorb the art and craft of engineering. For years, he toured nearly non-stop throughout central Europe. And to really nail down musical theory, Thomm studied classical guitar at the Stuttgart Conservatory with the great professor, Dr. Mario Sicca. And still the dream of Nashville played like an endless movie in his head.

And in 2003, he won the lottery. That year, Thomm was granted entry to the United States through the Diversity Immigrant Visa program, known commonly as “The Green Card Lottery.” He had tried unsuccessfully a few times before, but the dream wouldn’t die and he kept trying. Suddenly he was getting his passport stamped and boarding a plane for Nashville. He never considered another destination.

Nashville loved him, and he loved Nashville. Within weeks of arriving, his exquisite acoustic and electric guitar playing had Thomm on the road with acclaimed singer-songwriter Mary Gauthier. Soon he joined Nanci Griffith’s stellar band, the Blue Moon Orchestra, touring Australia, Europe, Canada, and all over the U.S. His work with Griffith led to him helping write and produce her album The Loving Kind.

Tours with Maura O’Connell, David Olney, Kim Richey and others have filled Thomm’s calendar as well since settling in Nashville.

His lifelong interest in the American Civil War led him to writing songs about the conflict, songs that turned into three volumes of music titled The 1861 Project. Each volume focuses on one chapter of the war: Farmers who were turned into soldiers, the role Irish Immigrants played in the Civil War, and the Battle of Franklin. Featuring such stellar artists as John Anderson, Marty Stuart, Jerry Douglas, and… Bobby Bare, these three albums have been described as musical historical novels “that suggest the Stanley Brothers and Alison Krauss meeting Steve Earle and Shelby Foote on the verandah at Tara.” In writing these sublime original tunes about the Civil War, Thomm has added his name to the short list of writers, such as Joseph Conrad and Vladimir Nabokov, whose works in their second language of English are as evocative as anything a native speaker can conjure.

Recently, Thomm joined forces with frequent collaborator Peter Cooper to create an utterly unique album by Mac Wiseman, the then-91-year old country and bluegrass singer. Thomm and Peter spent several Sundays at Mac’s house, talking about his life growing up in Crimora, Virginia, during the Great Depression. As they listened, the stories seemed to want to shape themselves into songs. Thomm and Peter obliged, creating 11 songs with Mac, songs that tell his story in a way that’s never been done before. Recorded at TJ Tunes, and sung by such luminaries as John Prine, Shawn Camp, Jim Lauderdale, Sierra Hull, and Mac himself, the album, I Sang the Songs, is a true masterpiece. Co-produced by Thomm and Peter, it appeared in 2016 on the Mountain Fever label.

Besides his production and songwriting work, Thomm released a solo album, Volunteer Trail, in 2016, and a duo album with Craig Market, Nowhere to Hide, in 2015, and has just completed a new album with his trio, Eric Brace, Peter Cooper & Thomm Jutz, to come out on Red Beet Records in 2017. He’ll be on the road with Brace and Cooper in support of the release throughout 2017 and 2018.

Thomm is currently working on a new Bluegrass record of original songs called “Crazy If You Let It”.

If you’ve listened to bluegrass radio recently, you have heard Thomm’s compositions. His songs “Around The Corner” (recorded by Terry Baucom & the Dukes of Drive) and “Carolina Wind” (recorded by Irene Kelley) were the two most played bluegrass songs of 2016. He is the recipient of 2 SESAC Awards, an alumnus of both Leadership Music and Leadership Bluegrass, and is an adjunct instructor at Belmont University’s Songwriting program.

And on top of all those accomplishments, Thomm has more than seventy placements of songs and instrumental music in TV shows and advertisements.

As he closes in on 15 years in Nashville, it’s clear that Thomm will only become even more known. He has just begun work on a second solo album, his production skills are more in demand than ever, his songwriting magic is sought by more and more artists -- in bluegrass and beyond.

Among working musicians, there’s a phrase frequently tossed out when things are going less-than-wonderfully: “Living the dream.” It’s usually used ironically, to point out the distance between the musicians’ dreams and the reality of their chosen path. Almost never is it used literally, until they meet Thomm Jutz and hear his story. Then they can honestly say, “Thomm is living his dream.”
20
What's This
Advertisement