Volume Five Christmas - Getting Ready For A Baby 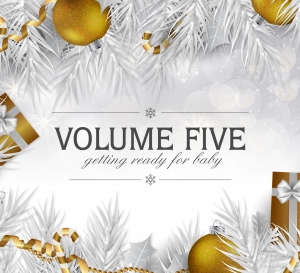 Volume Five has certainly been blazing a red-hot trail on the bluegrass scene with their live stage performances and chart-topping albums. Their newest release, Milestones, celebrates the band's 10th anniversary. As with their previous album, Drifter also on Mountain Fever Records, the group certainly demonstrates their various styles of bluegrass that has earned them critical acclaim from media, radio and their peers.

In 2017, Volume Five was honored with two International Bluegrass Music Association (IBMA) Awards. They received the Emerging Artist of the Year Award and the prestigious the Song of the Year Award for “I Am A Drifter” written by Donna Ulisse and Marc Rossi. The song appeared on Volume Five’s Billboard Top 10 album Drifter. The band includes the talents of Glen Harrell on fiddle & vocals; Patton Wages on Banjo & Vocals; Colby Laney on guitar & vocals; Jacob Burleson on mandolin & vocals; and Jeff Partin on bass.

Volume Five’s touring schedule has afforded them the benefit of playing with numerous artists over the years, some of whom have become fans such as Buddy Melton of Balsam Range who says, “What defines a great band? Superior musicianship, impeccable singing, moving song selections...Volume Five has all the above and more...Extremely talented, yet humble and genuinely real people. Volume Five has a magical quality about them that will undoubtedly make a lasting impression in the world of acoustic music."

In 2015, the band received two separate industry award nominations. Volume Five was nominated for IBMA’s Emerging Artist of the Year Award and also a GMA Dove Nomination for Bluegrass Song of the Year for "Daddy Was An Old Time Preacher Man" featuring guest vocals by Rhonda Vincent on the Dolly Parton cover song from their album Voices. In 2014, Volume Five garnered two IBMA nominations: one for IBMA Emerging Artist of the Year and also for the IBMA Gospel Recorded Performance of the Year for The Day We Learn To Fly (album), Stacy Richardson and Leroy Drumm (writers), Volume Five (producers), Mountain Fever (label). This was the band’s first gospel and fourth overall release on Mountain Fever Records. Volume Five was founded by leader Glen Harrell in early 2008 and has now grown into one of bluegrass music’s most unique new acts. “When I put this group together, I knew the style of music I wanted us to play and the goals we wanted to achieve. It was just a matter of finding the right guys who wanted to create their own identity in the industry. I didn’t just want us to be another band that moves onto the scene and is gone in a few years, but one that would have a unique sound that players and listeners would remember for many years to come - one that sounded like no other band in the business,” said Glen.
5
What's This
Advertisement