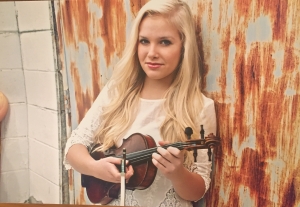 
This EP was released by 12 year old Annabelle Watts, Philpot, KY. Now 13 years old, she is accomplished on fiddle, mandolin, and guitar. In addition, she is also a song writer and penned the title track. Providing back-up on this exciting CD are Missy Rains, Ned Luberecki, Casey Campbell and Dustin Benson.

When she was 7 years old, she found her mother's violin in the basement of her home and told her parents she wanted to learn to play. Shortly after finding the fiddle, Annabelle began taking fiddle lessons from Randy Lanham, the educational director for the International Bluegrass Music Museum and a founding member of the Lanham Brothers Jamboree at Diamond Lake Resort.

Annabelle made her first national television appearance at the age of 11 on RFD-TV’s The Shot Gun Red Variety Show and has since appeared on PBS’s Woodsongs, PBS’s Song of the Mountains, and Kentucky Educational Television with the Lanham Brothers Jamboree. She's been competing since she was 9 and has “placed” in state competitions in Oklahoma, Alabama, Tennessee, and Georgia. She won first place in the fiddle competition in her age group at the Indiana State Fair and at the prestigious 2015 Galax Old Time Fiddlers Convention in Galax, Virginia.

She's proud of her photos with performers such as Little Jimmy Dickens, Rhonda Vincent and Kati Penn. She enjoys going to her Sunday school classes, showing people her collection of animals on the farm, going to movies with friends, playing soccer running and clogging.

If you are concerned about the future of bluegrass, take a listen to this CD and you will stop worrying. Annabelle is the future of the music we love.

For more information check out her Facebook page or send an e-mail to wattsannabelle@gmail.com

I was proud to have Annabelle as a guest on my weekly radio program, Best of Bluegrass.

For information about the radio show, use the AirPlay Direct “search” tab or send an e-mail to bobmitchelldj.com