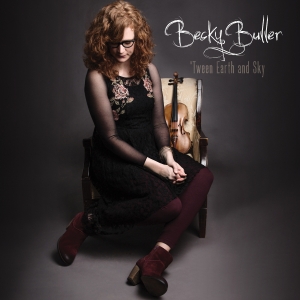 Back in 2001, when I called Becky Buller’s Rest My Weary Feet “one of the stronger debuts to come along in a while,” I also wondered, “is it the singing that’s her greatest strength, or is it fiddle playing? Or—third choice—is it the songwriting? It’s a tough call.”

Thirteen years later, as what is functionally (if paradoxically) a second debut conclusively demonstrates, it’s still a tough call. It’s clear, for instance, that her singing has only gotten richer, more informed, and both more subtle and more powerful with the passage of time. She’s got some greats singing with her here, but she’s never over-matched, and if you don’t get just a little bit of a jolt every time her she breaks into that breathy falsetto she so exquisitely controls, well, you’re a lot more cold-blooded than you ought to be. Her fiddle playing, too, stands with the best—confident, fluid, right in the groove and informed in equal parts by a grasp of tradition and a healthy dose of creativity.

Still, just as I wound up picking the songwriting back then, I’m going to pick it again. Becky’s one of our strongest writers, and one of our most distinctive. Even the most straightforward, true-to-tradition melodies have their little unexpected and delicious twists; even the most straightforward professions of faith show a care for getting just the right word to lie in just the right way. Where too many of today’s “story songs” go for the obvious arc and the easy sentiment, Becky’s serve to explore a rich variety of human experience and emotion. And all of this is true whether she’s writing with others or writing on her own.

So, as she moves forward (at long last) into a stage of her career where she’s calling her own shots, Becky Buller has every reason to be excited about this album. From the way that they leapt to help out, you can tell that a wide range of talented colleagues do as well—and just one listen is bound to make you feel excited about it, too.