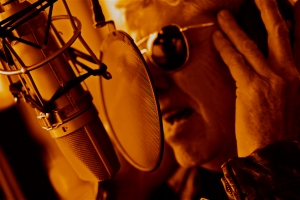 A couple of years ago Bernie Faulkner was up at the farm, as he often is. It hasn’t changed much since he grew up there in eastern Kentucky: spacious front porch and deck on the old house, lots of open space, tall grass rippling in the wind, weathered black fence and the family cemetery nearby, at a place called Red Hill.

“Heaven on Earth,” he calls it. Just thinking about it brings a faraway look to his face for a second. Then he comes back from there to finish telling the story of how he began work on Pot Belly Stove, his first bluegrass release and the latest of a long line of albums he has recorded as both a solo artist and a member of the rock/country supergroup Exile.

“I was up there in the cemetery, clearing out the plastic flowers and putting them into big trash bags. “That’s when this song just came to me. I couldn’t get it out of my mind. So when I finished cleaning up I went back down to the house and finished it up.” Faulkner closes his eyes and starts to sing. “Don’t put no plastic flowers on my grave.” Then he smiles. “I could hear Bill Monroe or Ralph Stanley singing that song,” he says. “People love it. It’s a happy song about death.”

You can hear that song now, on Pot Belly Stove, not sung by Monroe or Stanley but by Faulkner, whose rugged delivery and deep Kentucky drawl reflect both how much he’s lived and how his travels have led him back home. His songs sharpen this impression, in the rustic eloquence of his lyrics, sing-along choruses and especially on this album, in his embrace of the music he has loved since childhood.

“I was raised on bluegrass,” he says. “It’s in the air, in the water, in the people. That’s all they played on WKIC out of Hazard. When you’d pull into the Grandview Drive-In Theater, you’d see Flatt & Scruggs on the concession stand roof, playing through one mic to all the speakers in the cars.”

This was the music that inspired Faulkner to start writing songs. Many came from writing sessions with top Music Row tunesmiths. Others came to Faulkner on his own. Some got picked up and covered by major artists — “Black Diamonds,” for instance, which was cut by both Ralph Stanley II and the Reno Brothers. But only recently he noticed a quality in just about all of them that had escaped his attention before.

“They’re all bluegrass songs!” he says, laughing uproariously. “All this time I was just screwing them up with the wrong instrumentation!”

This epiphany got him thinking about who he was and where he was going. He’d spent more than four decades making music, learning the showbiz ropes with the Dick Clark Caravan of Stars and later on tour with dozens of headliners. He cut his first original song in Nashville in 1963, went twice through rehab, helped develop the careers of Billy Ray Cyrus, Troy Gentry and other young artists, pushed himself to the limit in the studio and in racing, whether on skis or in the Baja 500 behind the wheel of a Jeep he’d rebuilt by hand. Lots of running, driving, pushing …

All of which leads us to Pot Belly Stove, a collection of songs drawn from Faulkner’s real-life memories, his fertile imagination or a combination of both. Accompanied by some of the best traditional acoustic musicians in the business, he paints living pictures — of stashing ill-gotten gains and fleeing for your life on “Fortune,” coming face-to-face with truth long denied on “Rock Bottom,” imparting some choice country wisdom on “One Thing or Another,” “raising crazy redneck cane all night” when wealth finally comes calling on “Bling Bling” and, on the title cut, remembering the virtues of a simpler time. And, of course, the rousing, churchy “Plastic Flowers,” which just may soon become the essential sendoff song for memorial services.

Not that Faulkner plans on leaving soon. In fact, he’s just beginning a new adventure. “I came to doing Pot Belly Stove for one reason — to figure out where I wanted to go and who I wanted to be. Look,” he says, gesturing a circle in the air. “Here’s the big wheel of life. I’m in the middle — the hub. These spokes are everything that life has dealt me. But I took everything off that wheel, burned it down and all this purity came back to me — including the purity of this bluegrass music. See, I’ve never been a country artist going to bluegrass. I’m a bluegrass artist who’s finally coming back to where I began. I’m my own self, performing as only I can do. There will never be another one just like me.

Or, better, let’s gather at the Faulkner pot belly stove on a cold winter night, happy to have at last come home too.