Bill Hearne All That s Real 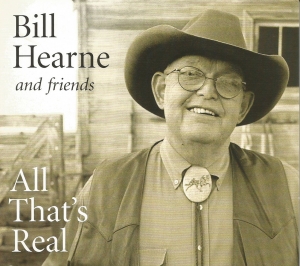 
Honkytonks, roadhouses, empty whiskey glasses, unrequited love are the brick and mortar of country music and there isn't a better mason than Bill Hearne...

Bill Hearne calls it 'The Road:' that metaphorical ribbon of honky-tonks, roadhouses, empty whiskey glasses, prison cells and unrequited love line with signposts and mile markers tattooed with names like Haggard, as in Merle, Williams, as in Hank, Owens, as in Buck and Lovett, as in Lyle.

Being legally blind, Bill has never actually driven The Road himself, but he sings with such authority of the tales he's heard while riding shotgun that you'd never know it.

Bill doesn't write his own songs. His greatness lies in his interpretive skills. His husky Texas baritone finds its way into a song's interior with the mellowness of fine bourbon and the warmth of a Sunday picnic. And of course, there's his pickin', a style he calls 'cross picking.'

He picked up the guitar when he was seven years old. "Since I didn't have people to play with, I developed a style that incorporated a percussion rhythm while playing lead riffs. Basically, I tried to be a one man band," he says.

Like fellow cross-pickers Tony Rice and Doc Watson, Bill is improvisational. "I hardly ever play the same thing twice,” he says. Not only does he rarely play the same thing twice, he rarely plays the same song twice. His repetoire is as vast as the east Texas plains. Don't, however, nurse your beer while waiting for yet another rendition of "Your Cheating Heart" to fortify your own lost-love misery.

While crowd-pleasers like "Your Cheating Heart" are the cornerstones of set lists from Austin to Seattle, Bill, thankfully, doesn't go anywhere near them. Bill's all about pleasin' the audience, but just how many definitive versions of "Your Cheating Heart" can the country music universe abide, anyway?

“Bill doesn't play standards,” says bassist Lance Quadri, a member of both of Bill's outfits, the Bill Hearne Trio and Bill Hearne's Roadhouse Revue. “That's why playing with him is so great. He plays obscure songs.”

And that's why listening to him is so great.

The Road, of course, isn't just a place of broken hearts and faded dreams.

Bill's just-released Frogville CD, "A Good Ride" is a hearty blend of tear-jerkers and foot-tappers. Impeccably produced, "A Good Ride" is infectiously listenable. Bill's guitar phrasings have never sounded sweeter and his voice seems to only improve with age. Always rich and full bodied, his voice inhabits "A Good Ride" with a warmth and familiarty that only proves what countless fans across the Southewest have always known: Bill never lies. He feels it, and so do we. Bill is the Real Deal, a genuine article in a country-music world that seems to have forsaken its roots.

Bill's professional life began in Austin in 1968. It was there where earned his first paycheck as a musician and met his future wife, Bonnie Cross. Bonnie's mellifluous east Texas alto fit Bill's picking like a glove. They toured Texas, New Mexico and Colorado before moving to Red River, New Mexico in 1979 where they became the house act at Chubbies Tavern. Fellow Texans Tish Hinojosa and Michael Martin Murphy moved to northern New Mexico, and Bill and Bonnie found themselves the center of a thriving-albeit small- Americana music community.

Fast forward a decade. Northern New Mexico's Americana scene fades like high-country grasses in autumn and Bill and Bonnie move to Santa Fe. Where they sign on as the house band for La Fonda, a venerable downtown hotel. For 15 years, Bill and Bonnie delighted Santa Feans and countless touristas with their infectious blend of bluegrass, country and swing music.

In 1997, they signed with Warner Bros. and recorded "Diamonds in the Rough." Produced by country veteran Jim Rooney, it climbed to fifth on the Americana chart that year and led to tours with Lyle Lovett and spots in some of the country's most prestigious country festivals, including MerleFest, Strawberry Music Festival and the Kerrville Folk Festival. The winds seemed to be at their backs, but in 2003, Bonnie's health deteriorated and she could no longer perform.

On his own musically for the first time since meeting Bonnie, Bill formed the Bill Hearne Trio and Bill Hearne's Roadhouse Revue. In the trio, Bill is backed by Bob Goldstein on lead guitar, mandolin and banjo and Quadri on bass. Add Auge Hays on steel guitar and you have the Roadhouse Revue.

"A Good Ride" is a good record, with something for everyone. Once-upon-a-time folkies will relish Bill's versions of Gordon Lightfoot's "Long, Thin Dawn." Bill warms up Hoyt Axton's dark "Evangeline" with colorful phrasings that are at turns thoughtful and playful.

Delbert McClinton's "Object of My Affection" rocks enough that the grandkids will dig it, if not find it downright groovy.

“We've got something for everyone on this album,” Bill says. “We're giving people their money's worth, that's for sure.”

Well, Bill, you've actually been doin' that for years.

Come along with Bill on The Road. If you don't have a good time, well then, you must be sleeping in the back seat.
10
What's This
Advertisement