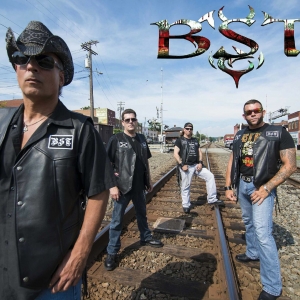 BlindSide Thunder is changing the game in the genre of heavy and hard rock music. Incarnated from the ashes of past classic rock, blues and metal, BST has created and established a patent on their unique style called "Rebel Rock". Their creative hook driven songs that include heavy guitars and bombastic drums, creates stripper music for the imaginative house wife and that "smash the dashboard feeling" driving down the highway.

With the core of the band arranged around a party atmosphere, BST is known by their enormous fan base to be tongue-in- cheek about hot women, good friends and great parties! Even though the music may invoke a relaxed good time, the guys in BST are focused and intense about ensuring their ever-growing fan base receives 110% at every show, performance and interview. Never forgetting where they have come from and always happy to help out a good cause in any way they can, the down to earth members of BST, some of the most personable guys you will ever meet, go out of their way to support philanthropic endeavors. As three of the members have served in the armed forces, BST feels a strong kinship with the everyday, hard-working beating heart of America, which elevates every BST show to a higher level than those of their peers.

In short, once you have listened, you will agree that Blind Side Thunder is churning out no-holds-barred, no-excuses homegrown rock and roll with a great attitude. As their fans will agree, when the world moves faster and times get stressful, its time to turn on BST for some much-needed stress release because, after all - We Love to Party!!!