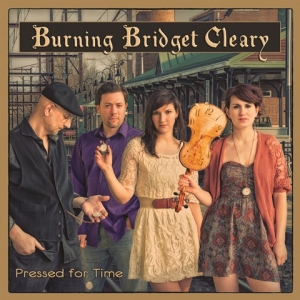 Burning Bridget Cleary, the high-energy Celtic folk band from SE Pennsylvania, has broken new ground with their fourth release, "Pressed for Time." The CD was named #2 album in its first month of release on the June Folk DJ Chart.

Every track got airtime and three tracks made the top 20 for the month:

Comments on "Pressed for Time"
“The album is a triumph! Really, after just one listening I can tell you it hits all the right notes with me. The arrangements, performances, production and sequencing all come together in a way that makes for a wonderful listening experience. It's adventurous, intelligent, playful and ever so satisfying.

I hope you'll pass along my best wishes to the band. What a truly remarkable accomplishment. I can't wait to get it on the air, not only on Celtic Sunday Brunch, but my other show, "Wednesdays with Walt." I want everyone to get a taste of it.

By the way, it's not like me to gush over new recordings. It just so happened that this one knocked my socks off.”


“This is a great cd from a very exciting band.” -John Bates, WTSR Radio host, Legacy

I purchased the CD at the Celtic Fling and this is a wonderful album...loved EVERY tune . . . such awesome talent!!!
-Elizabeth Weinhold Meyer, Hanover, PA

When was the last time you listened to a band that drew you into both their music and their lyrics? In today’s music world, it’s becoming more and more difficult to discover a band that expresses a story to you though their song. But, for Celtic band, Burning Bridget Cleary, storytelling is a key part of their music.

Who is Bridget Cleary the person, you might wonder? Well, Bridget Cleary was an Irish woman killed by her husband in 1895. Her death is notable for one distinct peculiarity: the stated motive for the crime was her husband’s belief that she had been abducted by fairies with a changeling left in her place; he claimed to have slain only the changeling. Michael Cleary denied having murdered his wife, admitting only to having done away with her changeling. His so-called “fairy defense” did not hold up in court and he was found guilty of manslaughter and sentenced to 15 years in prison- after which he sailed for Montreal. His cohorts, including some of Bridget’s own relatives, were convicted of wounding Bridget and served lesser sentences.

As a result of this landmark case, a precedent was set in Irish law that a person could not be harmed or killed for suspicion of witchcraft, and a belief in witchcraft could not be used as an insanity defense in a murder trial.

In the spring of 2011, the band completed a week long tour of Ireland where they performed at seven different venues from Dublin to Galway. They got the opportunity to visit the rural Tiperrary cottage of their namesame, Bridget Cleary, who is remembered as the last witch burned in Ireland.

For Rose Baldino, who performs on fiddle, banjo, and vocals, touring Ireland was one of the most exciting experiences of her life so far. "As far as visiting the cottage, it was a completely surreal experience," said Rose. “When you tell a story over and over again, it almost loses meaning in your mind. You become so used to saying the words that you almost lose sight of what the meaning is. Actually visiting Bridget’s cottage and walking around the house where she used to live was such an amazing experience. The story became “real" for me at that point. We were all in awe of the history and the kindness showed to us."

The band traveled with a tour bus full of fans. The owners of the cottage arranged for the whole tour to be fed at the local pub, which was located next door to the cemetery where Bridget Cleary was buried. Meanwhile, they personally picked up the band members and drove them to the cottage and showed them around. The house had been renovated, but the fireplace remains in its original state.

How did the band, Burning Bridget Cleary (BBC), come together? The band formed in 2006 when Lou and Rose Baldino were playing as a duo and Lou submitted a demo tape to the Green Lane Scottish and Irish Festival. When they got the call that they were hired, Rose called her friend, Genevieve Gillespie, and asked her to join in. Lou began investing in recording equipment, and with his help they produced their first album in time for the festival. Pete, the drummer, joined in 2008. Genevieve left the band in 2011 and Deirdre Lockman joined the group in 2012.

For BBC, all the accolades point to how much the band members love playing and performing with one another. "Knowing that people enjoy listening to us as much as we enjoy playing for them is such a privilege, " said Deirdre, fiddler and singer. "No matter how many venues we play, we always appreciate getting positive feedback. And receiving awards motivates and encourages us to keep on going."

One of the aspects BBC most enjoys about their music is getting the crowd involved. "The crowd always loves upbeat tunes like reels and jigs, " said Rose. “They like music that makes them want to dance and be happy. Then, in the middle of a set, we may throw in a slow, haunting air or a melodic waltz. It changes up the body rhythms of the whole place, makes people take notice, and sometimes you could hear a pin drop because everyone is into it. We love that, too".

The CD includes a broad array of rollicking audience favorites, trad session-style tunes, several folk songs old and new, and even a lively Old-Timey/bluegrass number. The album will be supported by summer festival dates and a professional radio campaign by Charterhouse Music.

Rose Baldino, fiddler and vocalist, comments,
“We have always chosen material that we love, and our audiences really pick up on our enthusiasm for the music and our original arrangements. That’s a big part of what defines us as a band. This is an album with lots of variety, with influences from both Celtic and folk music. We want it to take listeners for a great ride, from stimulating to soothing and back again. And, we are very excited to welcome fiddler, Deirdre Lockman, into the band and introduce her for the first time to fans of our recorded material.”

• Burning Bridget Cleary recently returned from Muskegon, Michigan where they were invited to showcase at the North American Irish and Celtic Festival Organizers conference.

• In addition, they have been chosen to present a formal showcase at the Capital Area Northeast Regional Folk Alliance (NERFA) One-Day Conference in June.

• More recent news: “Autumn Lux Lucis", an original composition by fiddler, Rose Baldino, recorded on their second CD, Everything is Alright (2008), will be featured in an upcoming independent film, “Surviving Evidence.”