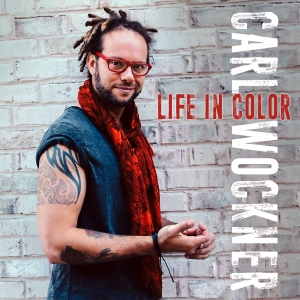 They say hearing his voice is like being punched hard in the belly then immediately massaged back to a point that you actually feel better than you did before you were punched. They say that he actually uses a full sized guitar but it looks so small because he plays it into submission. They say he was born with a full head of dreadlocks, and that no matter what color glasses he wears, they will always turn red before he leaves the house in some kind of fiery magic. They say he can eat lasagna like its going out of fashion, but he truly believes it never will.

Carl Wockner was named the first and ONLY Australian artist to ever win Top Honors at the International Acoustic Music Award’s 2015 (USA), along with top of the AAA category for the release of his new album Crayon Days with producer Michael Flanders in Nashville TN. Wockner has skipped up the charts with his first two single releases receiving high rotation to national radio in both Australia and USA. The same album has received a 2016 IMA (Independent Music Awards) nomination for Best Adult Contemporary Album.

A rare “Live Looping” style solo performance matched with his signature vocals and unique acoustic guitar work renders Carl in a league of his own. His live shows have been recognized throughout Australia and USA with multiple headliner performances at festivals and touring.

Carl’s first EP, the self-produced, recorded, mixed (all in his lounge room) Acoustic…ness, was released in 2011 to an overwhelmingly positive response. Single “Pictures” received airplay on Hot 91 FM and ZINC FM, the latter of whose DJ’s referred to him as “the man with the big hair and Golden Tonsils.” Carl was also named a finalist in three categories at the 2012 and 2013 MusicOZ awards: Acoustic Singer/Songwriter, Blues and Roots, and Pop.

Produced and recorded in the famous ‘Music Row’ location of Nashville, TN by industry heavyweight Michael Flanders, Crayon Days picked up where Acoustic…ness left off with its honest lyricism and innovative songwriting. The diverse set of sounds and moods Carl can create with just a guitar and his voice is truly remarkable, all of which are complimented by featured album guests Jenn Bostic, Siobhan Magnus and Redd. The Point Sunshine Coast editor Rhys Fox said of Crayon Days, “Bordering on almost-too-damn-good, Crayon Days sees and artist that has embraced his own musical evolution, and is now just waiting for everyone else to catch up.”

We are all excited to see what is next for this up and coming superstar!
0
What's This
Advertisement