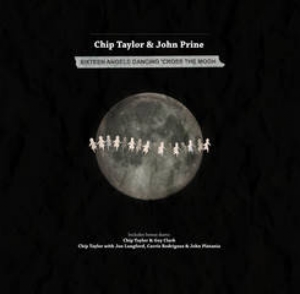 DETAILS
Format: 10" Vinyl
Label: Train Wreck Records
Release type: RSD Exclusive Release
More Info:
For legendary songwriters Chip Taylor (Wild Thing) and John Prine (Paradise), two of their most acclaimed and covered songs were about angels. Taylor's Angel of the Morning has been a major hit several times - from Merrilee Rush to Juice Newton to Shaggy. Prine's Angel From Montgomery has been recorded by too many major artists to mention, most famously by Bonnie Raitt. After Swedish singer Jill Johnson had recent hits with both songs in Scandivavia, Taylor mentioned to his longtime friend, Prine, that they should write another "Angel" song together (Taylor & Prine teamed for the wonderful The Way Of It back in 2001). The result is their funny and charming duet - Sixteen Angels Dancing 'Cross the Moon appearing as the lead track on a special 10" vinyl EP. The track features Prine's extraordinary bassist David Jacques and from Taylor's band, guitarist John Platania (Van Morrison). The crazy circumstances behind the actual writing of the song is recalled by Taylor in an extended spoken word introduction to Sixteen Angels. Also on the EP are two other duet tracks by Chip Taylor. On One Hell Of A Guy, he is joined by Guy Clark, a little known gem from 1997. The final song is by Chip Taylor,Carrie Rodriguez & Jon Langford - One For The Road. Taylor & Rodriguez were touring behind their first album, the #1 Americana record Let's Leave This Town in 2002 when they met up with Langford in Chicago. The three popped into the studio and came up with One For The Road. None of these tracks have ever been released before. This 10" vinyl EP is available only through Record Store Day retailers.