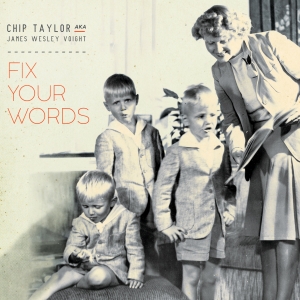 New York, NY – 2016 Songwriters Hall of Fame inductee Chip Taylor (aka James Wesley Voight) is not one to rest on his laurels. The prolific award-winning songwriter has announced a March 2 release date for his latest album of compositions about the human condition, Fix Your Words, on Train Wreck Records. The personal – yet universal – appeal of Taylor’s songs is reinforced by the nostalgic family cover photo on the new CD, which pictures (left to right) Chip Taylor, plus brothers Barry and Jon Voight and their mother, Barbara.

“Whatever Devil Is In Me,” a song from the new album, will be premiered on the American Songwriter magazine website (www.americansongwriter.com) on Friday, January 26.

2017 was a momentous year for Chip Taylor, which saw his song “F**k All The Perfect People,” a track off the 2012 album of the same title, become a viral internet smash generating over one million plays on Spotify and introducing Chip’s music to an entire new generation of listeners.

Chip Taylor has been writing and performing for nearly 60 years. Perhaps the New York Times said it best: “If you only know him as the as the guy who wrote ‘Wild Thing’ and ‘Angel of the Morning’ — you don’t know him! Chip Taylor is making some of the most distinctive acoustic music around today.” With the release of Fix Your Words, he continues to create timeless, thought-provoking music.

The 11 all-original songs on Fix Your Words feature two distinct sides. The amazing title track leads side A through the quiet, reflective batch of prayerful thoughts. Side B, subtitled “When I Was a Kid,” is an inspired meditation on the power of memory and sadness and features some of the most emotional and affecting songs of Taylor’s lifetime of songwriting.

As with Taylor’s The Little Prayers Trilogy (Mojo called it “a masterpiece;” while Uncut said it was “the crowning glory of a storied career” and placed it on its Best of 2015 list), the new album was co-produced by keyboardist Goran Grini. It also features Chip’s longtime compadre, master guitarist John Platania (Van Morrison), as well as drummer Tony Leone and bassist Tony Mercadante.

About Chip Taylor
Creating distinctive music that is also enduring and influential has been Chip Taylor’s métier over the course of what is closing in on five decades as “one of America’s finest songwriters as well as a masterful singer and performer,” says Rolling Stone. His two best-known songs are only some of the many pop, rock, country and R&B chart hits he wrote in the 1960s (Janis Joplin, Aretha Franklin, Jimi Hendrix, Willie Nelson, Dusty Springfield and Frank Sinatra all recorded his songs). Taylor was one of the pioneers of the pivotal country-rock movement as a recording artist in the 1970s. His 1973 album, Last Chance, remains a beloved cult classic, and has just been packaged as a reissue, titled Last Chance: The Warner Bros Years, a 3-CD set that also includes his 1974 album, Some of Us, and 1975 LP, This Side of the Big River, plus a DVD of Taylor and his band recorded live at Austin’s Armadillo World Headquarters in 1973. After refusing to play by the Nashville establishment rules, Taylor gave up music for full-time professional gambling in 1980.

Since returning to music in 1996, he has enjoyed elder statesman stature within the Americana, contemporary folk and singer-songwriter scenes as an artist in his own right, as well as in collaboration on albums and in performance with Carrie Rodriguez, John Prine, Kendel Carson and John Platania. In a remarkable and prolific run, Taylor has released nearly an album a year since his return, each rising high on the Americana chart. As England’s The Guardian notes, “Chip Taylor, like Johnny Cash, is well worth rediscovering by a new generation.”
14
What's This
Advertisement