Chris Jones and the Night Drivers "Run Away Tonight" 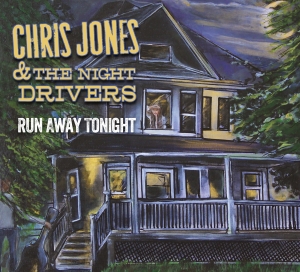 Founded by guitarist Jones in 1995, the Night Drivers feature four distinct personalities who bring a multitude of talents to each performance. Indeed, the group boasts three broadcasters who appear regularly on SiriusXM’s Bluegrass Junction—Jones, banjo man Ned Luberecki and bassist Jon Weisberger—and Jones and Weisberger have won acclaim for both musical and industry achievements, with the former earning an IBMA Song of the Year trophy (“Fork In The Road”) and IBMA Broadcaster and Print Media Person of the Year awards. Weisberger collected the latter honor over a decade ago (along with a trophy for Best Liner Notes), and was the first recipient of the organization’s Songwriter of the Year award in 2012. Luberecki has also been nominated for the Broadcaster honor several times, and has earned additional recognition as a premiere educator, teaching at banjo camps around the world and recently releasing a popular beginning banjo instructional DVD, while mandolinist Mark Stoffel has built a strong reputation as a producer and recording engineer.

The strength and durability of this lineup—Weisberger and Luberecki have both been Night Drivers for 13 years, with “newcomer” Stoffel on board for the last 8 of those—has made them slow but steady contenders in the bluegrass marketplace. Their most recent studio album, Lonely Comes Easy (Rebel Records, 2013), has generated three #1 and two #2 bluegrass airplay hits, while 2014 saw the quartet break new ground for itself with appearances at festivals ranging from trad-leaning Bean Blossom to Merlefest, Delfest, Grand Targhee and Big Sky Big Grass. The Night Drivers capped the year with the September, 2014 release of Live At The Old Feed Store on their own GSM label; recorded in an intimate Illinois venue, the album shows the band enjoying a comfortable but energetic evening with fans and friends, and has already generated more chart action with the bluesy “Like A Hawk,” firmly lodged in the top 5 in the early months of 2015.