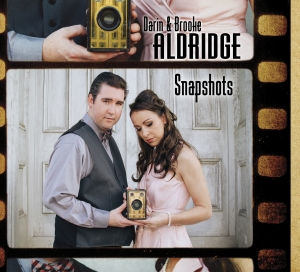 
DARIN & BROOKE ALDRIDGE
Husband and wife duo Darin & Brooke Aldridge draw on the traditions of their native North Carolina, the savvy of a young, gifted band and their own dedication to ingenuity to create the most mature release of their career with their latest release, Snapshots.
The duo has placed at the top of the charts on Americana/Roots, SiriusXM, Bluegrass and Gospel charts. They have received multiple nominations from the International Bluegrass Music Association (IBMA) the Society for the Preservation of Bluegrass Music of America (SPGBMA) and Inspirational Country Music (ICM). Their music videos “Wildflower” and “Tennessee Flat Top Box” is being featured on outlets including CMT, CMT Edge, GAC, Bluegrass Ridge TV and The Bluegrass Situation. TV appearances include PBS, Great American Gospel, The Bluegrass Road, Presley’s Country Jubilee, RFD-TV, Rural-TV, Daystar Network, Blue Highways TV, Song of the Mountains, Woodsongs and Music City Roots.
Both highly acclaimed vocalists in their own right, Darin and Brooke combine rich harmonies with impeccable musicianship to create the unmistakable sound that has made them one of the hottest young acts in acoustic music and they’ve surrounded themselves with a band of equally amazing pickers. Darin spent 6 years as a member of the acclaimed County Gentleman and is a highly sought-after multi-instrumentalist. Brooke has been lauded for having one of the most powerful voices in music of any genre.

Snapshots, their 6th album, made its debut at the #8 spot on The Billboard Bluegrass Album Chart and by May the first single “Tennessee Flat Top Box” had claimed the #1 position on the Bluegrass Today Chart, with the album closely behind at #3. The new project is rooted in the stellar musicianship of Darin and Brooke’s bluegrass and gospel background. Snapshots is available on the Mountain Home Music Company label and showcases Darin and Brooke Aldridge's versatility and musicianship, plus appearances by special guest artists like Doyle Lawson, Ricky Skaggs, Sam Bush and more.
About “Tennessee Flat Top Box:
“A great song deserves a lot of interpretations and Darin and Brooke's is a beautiful jewel of a rendition of one of my Dad's most-loved songs.” ~Rosanne Cash

“Husband and wife duo Darin & Brooke Aldridge have carved out one of the fastest rising careers on the acoustic music scene today.” ~Billboard Magazine

Darin and Brooke were among the artists honored to appear at the recent grand opening of the Earl Scruggs Center in Shelby, NC. The cultural center is dedicated to the legend who inspired generations of musicians and artists.
The Aldridge’s are mainstays on radio charts with singles routinely maintaining top chart positions well after their release.
For more on Darin and Brooke Aldridge, please visit www.darinandbrookealdridge.com
23
What's This
Advertisement