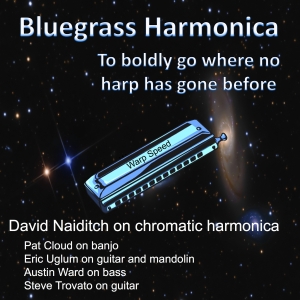 David Naiditch plays all the tunes on this album with C-tuned chromatic harmonicas, mostly the Seydel Saxony and Hohner CX-12 Jazz. The harmonica harmonies on tunes such as The Lovers’ Waltz, Dixie Hoedown, and Whiskey Before Breakfast were produced with multiple harmonica tracks.

The other musicians on this CD are all great bluegrass players. Banjoist Pat Cloud has taken melodic playing to new heights, and is equally fluent in jazz and bluegrass. He has played with bluegrass greats such as Clarence and Roland White. Pat has two instruction manuals, "Key to Five-String Banjo" and "Straight-Ahead Jazz for Banjo," both published by Mel Bay.

Eric Uglum plays lead guitar on all the tunes, except for Blue Violet Waltz. He also plays rhythm guitar and mandolin. Eric has been in many topnotch bluegrass bands, such as Lost Highway, and has recorded with bluegrass artists such as Alison Krauss and Ralph Stanley. In addition to playing the guitar and mandolin, Eric recorded, mixed, and mastered this album at his New Wine Sound Studio.

At 20, Eric’s son, Austin Ward, was already recognized as a master bassist with great timing and tone. His fingers effortlessly glide across the strings, producing a smooth, yet swinging feel that holds the band together.

Steve Trovato plays lead guitar on Blue Violet Waltz. Steve is known as the great chameleon because he has mastered so many styles—country, blues, jazz, and rock.

Harmonica used in bluegrass
David Naiditch once half-jokingly remarked that harmonica players are about as welcome at bluegrass jams as the mosquitoes that come out to feast. Indeed, many bluegrass folks consider the harmonica a questionable instrument, although it is certainly better established in bluegrass than instruments such as the clarinet or saxophone. Harmonica player Mike Stevens recorded with Jim and Jesse McReynolds; Charlie McCoy, with Flatt and Scruggs; Buddy Greene, with Bryan Sutton, Aubrey Haynie, Ron Block, and Stuart Duncan; PT Gazell, with Jerry Douglas and Ricky Skaggs; and WV. Ryan Rightmire, with the Del McCoury Band.

What makes David’s approach different is that, unlike other bluegrass harmonica players who use diatonic harmonicas, David exclusively uses the chromatic harmonica. When played well, the chromatic harmonica can produce a sweet, fiddle-like sound and handle fast, intricate melodies. Since David uses a C chromatic to play in all keys, he can deal with tricky chord changes and key transitions without having to quickly switch harmonicas. Since the chromatic provides all the notes without having to bend or over-blow, the timbre of each note isn’t dictated by the instrument, but is controlled by the player. David believes that keeping the same tone and timbre throughout a tune is often desirable in bluegrass.

David's Bio
David has been part of the Los Angeles music scene for many years. He started with the blues and eventually delved into other genres: bluegrass, country swing, and Django Reinhardt-inspired Gypsy jazz.

David’s musical journey began in the early ‘60s, when he was tutored on the diatonic harmonica by the legendary blues icon Sonny Terry. In the mid-1960s, David taught harmonica at the Ashgrove, a club that was the focal point of the Los Angeles folk music revival. Years later, David taught and performed at other venues in the Los Angeles area, such as McCabe’s Guitar Shop, Boulevard Music, the Coffee Gallery Backstage, and Viva Cantina.

In the mid-’90s, David started focusing on the chromatic harmonica. He honed his skills by attending numerous music jams and gigs, armed only with a chromatic in the key of C. By playing in all keys, David became comfortable playing by ear and improvising in many styles of music.