Delta Reign - Calm Before The Storm 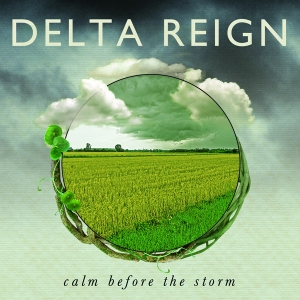 Delta Reign was formed in the fall of 2004 by husband and wife team, Pat and Benita Murphy. The Murphy’s have been performing for many years around the country in bands together and separately.
Benita Murphy on guitar, brings a swing influence to the band by switching between bluegrass rhythm and moving swing chords. Singing most of the lead vocal, she is also the principle songwriter and arranger.

Pat Murphy on banjo keeps the bluegrass drive and lends his creative ideas in the arrangements. Singing together over the years with Benita, they have developed the tight blend and phrasing of "family" style harmony.

George Mason on fiddle, comes to the group from Harrison,AR where he grew up on bluegrass and then went on to perform with major touring acts, as well as working as musical director for the Osmond family for six years. He joined the Murphy’s in May, 2010 bringing not only superb skills on the fiddle, but a tenor voice that blends beautifully with the
Murphy’s along with songwriting experience to enhance the bands sound.

On upright bass, newest member, Joshua Faul from Gulfport,
MS, is new to bluegrass, but experienced in many diverse genre’s of music. Josh anchors the band with innovative playing and a solid groove.

Calm Before The Storm is an excellent example of what this band offers during their performances. With the fusion of bluegrass, delta blues, swing, jazz and rock, the band is certainly diverse with its music. With their debut CD, Delta Reign covers the gamut of great music with a Hank Williams classic ("There'll Be No Teardrops Tonight"), a Flatt and Scruggs standard ("A Hundred Years From Now") and two great songs penned by Jimmie Davis ("Columbus Stockade Blues" and "You Won't Be Satisfied That Way"). Lead singer Benita Murphy also contributes two original songs that seem to fit flawlessly within the project ("Last Southbound Train" and "Red Dirt Dreams").

"So we come to the question: what happens when you combine swing-style, sock rhythm guitar with 3 finger banjo in a four pice bluegrass ensemble? This is what Delta Reign is here to answer, and they do it with a breadth of experience and ability in a wide range of sets and sub-sets...To my ear, the mix of Earl Scruggs banjo licks with Texas-style guitar is irresistible. It invariably makes me smile."


The band has carved out a niche and favor with fans and press alike, performing various concerts, festivals, music venues and events around the southeast.
13
What's This
Advertisement